Before joining the team she was building a robot in a University lab in London, as well as writing a paper on Advanced Nuclear Robotics Science, and at Harvard she took a year in Ancient Universal Legends. Rose was chosen by Andrew Hartford for her skills in working with science equipment and adventure devices.

TV STORY-Kick into Overdrive She also claims she learned how to translate morse code by the age of four. Despite her high intelligence, she shows a highly casual nature and is often found chewing something. She is also a highly dangerous fighter, equally fights Mig on her own in One Fine Day, Miratrix and Bombardo in Pirate in Pink.

Growing up so quickly because of her high intelligence, (even skipping most of grade school, starting college at eight years old), Rose didn't have much of a childhood. She set her sights on increasing her knowledge to an extensive amount, partially because as a little girl she never felt unique or special in any way. It's her experiences as a Ranger that teach her that she's special, that she has friends who care about her, and that she can let loose once in a while and enjoy herself, even while having to save the world.

She was once transformed into a pirate, Rosie the Bold, and ended up bonding with the spectre of the pirate Brownbeard; she keeps it a secret that she loved being a pirate[1]. Rose mixed zord based technology with the Sentinel Sword to create a new armor, but stated it was not safe for humans[2]. Her new armor would later be used by Mack Hartford as his Battlizer, making him the Red Sentinel Ranger.

At the end of the series, Rose, knowing intelligence is something to be proud of, decides to go back to teaching.

TV STORY-Crown and Punishment Her genetic power is invisibility, her primary weapon is the Drive Geyser, and she drives the Sub Driver and Shovel Driver Zord.

Rose and the other Overdrive Rangers returned as part of the army of Legendary Rangers that helped the Mega Rangers defeat the Armada once and for all, fighting in a huge battle against hundreds of X Borgs and dozens of Bruisers.

Rose along with the other Overdrive Rangers as well among all the Ranger teams which appear in the Korean-developed mobile game Power Rangers Dash.

As the brains of the team, Rose is considered genius prodigy by many, which she takes pride in and says she's "never wrong."[3] Rose is reserved but friendly. She considers her work as Ranger as chance of discoveries and impressions, but she takes her job seriously. Rose is also very enthusiastic. 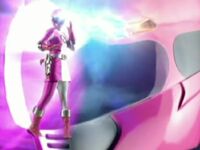