Ronny was a top race car driver of worldwide fame, and had just won a championship in Italy when Andrew Hartford contacted her. Meeting with Will Aston, Dax Lo, Rose Ortiz and Mack Hartford, Ronny was informed that she was one of those chosen to become Power Rangers and find the five jewels of the Corona Aurora. Ronny and the others were skeptical about the idea of being superheroes but the Sentinel Knight convinced them that they were the only hope of the world.

TV STORY-Kick into Overdrive Ronny was a good friend with other Power Rangers and they came through numerous fantastic adventures. Although she is a capable Ranger, she has served the damsel in distress 3 times in the series. She was first captured by Mig and Cheetar, who stole her Overdrive Tracker to free their brothers from the Prison Mirror but managed to free herself when Tyzonn got her tracker back to her.

TV STORY-Man of Mercury She was later captured twice by Moltor, Mig and Benglo, who intended to use her life energy to power Moltor's Cybernetic Rex, but was saved by Will before her energy was completely drained.

TV STORY-Ronny on Empty After finishing their mission as Rangers in the finale of the season, Ronny again became a top race car driver and continued winning championship and seeking fame.

Ronny and the other Overdrive Rangers returned as part of the army of Legendary Rangers that helped the Mega Rangers defeat the Armada once and for all, fighting in a huge battle against hundreds of X Borgs and dozens of Bruisers.

Ronny along with the other Overdrive Rangers as well among all the Ranger teams which appear in the Korean-developed mobile game Power Rangers Dash.

Ronny was an enthusiastic and bold person. She showed a tendency of never giving up, even when everything looked bad. She was also highly competitive; she annoyed the other Rangers by repeatedly showing off when beating them at games, and had to be taught that winning isn't everything. However, she also understood that when it came to fighting evil, failure was not an option.

She shows extreme joy when faced with the vehicles the Overdrive team will use and attempts to act as driver as much as possible; when exploring areas once morphed, she can be extremely excitable.

Ronny was also a loyal friend. It was her who convinced Tyzonn that he should join the team, explaining to him that the deaths of his previous team were not his fault.

She used to have a pair of lucky socks that she'd worn for every race and that had never been cleaned ever; the smell was strong enough to stagger Blothgaar. She lent the socks to Mack to counteract his bad luck, but after he stopped using them, Spencer cleaned them, much to Ronny's dismay. 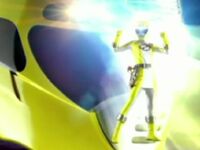