"You're too curious for your own good!"
―Rockjetron when confronting the Galaxy Rangers.[src]
"Huh?"
―Rocketron reacting to the Red Capsular Cycle and his final words before his initial defeat.[src]
"AH HA HA HA HA! Now 'll crush you!"
―Rocketron when he grew and tried to crush the Rangers under his palm.[src]
""Give me my power back before it's to-""
―Rockjetron's final words before his destruction with his explosion cutting off the word "late."[src]

After the Rangers left, it was revealed that Rocketron survived once again and had reformed in his usual size. However, Deviot grabbed Rocketron and drained his energy to restore himself to his normal form. Deviot walked away as Rocketron begged for his energy back before exploding from the loss of his life energy. 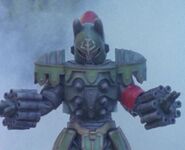 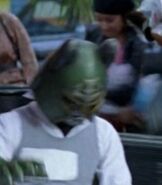 An alien with the head and arms of Rocketron as seen in "Shadow" Pt. 2.