""Bwargh! Let's make this interesting!""
―The Rock Troll's first words (in his Dark Troll form) when confronted by the Rangers and before presenting the power he was given.[src]

""I'm not afraid of you! Boulder Blast!""
―The Rock Troll when the Centaurus Phoenix Megazord first shows up and then when he performed his signature attack to try and stop its finishing move as well as his final words before his death.[src]

The Rock Troll (as his name suggest) is a massive troll-like beast with rocks that act as armor and is one of the many monsters of the Underworld. He is the upgraded form of the Dark Troll.

After Necrolai tricked both Morticon and Koragg into hating one another, this Dark Troll was sent to the surface by Koragg, and was also given the Rangers's combination power. With this power, the monster was able to grow and transform into the Rock Troll. The Rangers (minus Nick who was trapped in another dimension after he leapt onto Catastros at the end of a Zord fight that Necrolai's deception caused) transformed into their Mystic Titan forms and tried to battle this monster, but were no match due to the Rock Troll's strength. Luckily, they managed to release Nick from the dimension he was in, along with Catastros. Catastros then thanks Nick for healing him by combining with the Mystic Phoenix to form the new Centaurus Phoenix Megazord. The Rock Troll and tried to take on the Megazord, but this new Megazord was too powerful for the Rock Troll to handle, and the monster was destroyed by the Centaurus Phoenix Megazord's Fire Tail attack. By destroying the Rock Troll, the Rangers regained their Titan Megazord power, but Catastros then returned to his master, Koragg.

Unlike the Dark Troll before hand, the Rock Troll is capable of speech, though he (like Mucor) isn't the brightest of monsters, but he is brave enough to take on the Centaurus Phoenix Megazord. 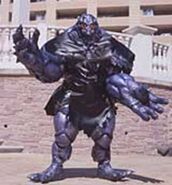 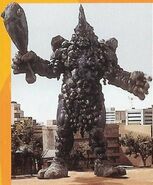 The Rock Troll
Add a photo to this gallery

Retrieved from "https://powerrangers.fandom.com/wiki/Rock_Troll?oldid=970708"
Community content is available under CC-BY-SA unless otherwise noted.