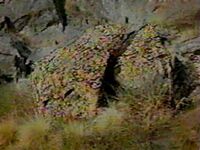 A magical rock that by calling forth its power, would cause the Earth to spin backwards, reversing time. Lord Zedd did this so time would be reversed, reducing the Power Rangers to children, that way Zedd could destroy them before they became Rangers. He also used his staff to speed up the process.

Once the rangers were reduced to children, they had no recollection of being rangers, who Lord Zedd, Alpha or who Zordon was. He first sent down a legion of putties to take care of the rangers while they were playing dodge ball. However, they quickly discovered the Z on their chests would defeat them. In response to this, Zedd sent the Photomare.

The Rangers had to work fast, as the Rock of Time's reversing effect had begun to de-stabilize the planet's foundation. The Rock was being guarded by Goldar, Putties, The Invenusable Flytrap, Dramole, and Oysterizer. After the monsters were defeated, the Rangers destroyed the Rock Of Time with the Power Cannon, returning time to its proper course.Rangers Back in Time

Retrieved from "https://powerrangers.fandom.com/wiki/Rock_Of_Time?oldid=882721"
Community content is available under CC-BY-SA unless otherwise noted.