""As purely fierce as a lion, as powerful as a lion. The one destined to rule the world, my name is the Black Lion Rio." (丈きこと、獅子のごとく。強きこと、また獅子のごとく。世界を制する者、我が名は黒獅子リオ, Takeki koto, shishi no gotoku. Tsuyoki koto, mata shishi no gotoku. Sekai o seisuru mono, waga na wa Kurojishi Rio)."
―Rio's roll call.[src]

He later came to fight alongside and identify with the Gekirangers.

Rio's only interest is in gaining strength, due to a time in his past when a monster murdered his family the night Sha-Fu found him and took him under his wing, with Rio making it his sole purpose in life to become stronger so he wouldn't suffer such pain again. While assessing his strength, Rio saw his senior Dan to be an ideal opponent to test his abilities on in vain.

Eventually dissatisfied with his progress in the Beast Arts, Rio turned to the Confrontation Beast-Fist Akugata as the means to become strong enough to surpass Dan. Gou Fukami, whom Rio came to consider his closest friend, attempted to stop him, only for their friendship to end that day. Surviving Gou's attack, Rio mastered the Akugata and later battled Dan, only to learn that Dan was mortally wounded prior and thus was denied a true win in their battle. But Dan's dying words give Rio a sense to hope await the coming of his "destined" rival: Jan Kandou.

Setting up base on the Confrontation Beast Hall, Rio brought back from the dead the Akugata's ancient warriors, using the Rinrinshi to cause despair and sadness in humanity for power after receiving the Fist Demons' Bracelet. To speed up his goal, Rio took the True Poison fang from Braco to revive the Fist Demons Kata and Rageku. From Kata, Rio learned to channel his fear and hatred to manifest his Confrontation Ki. From Rageku, he learned to harness his jealousy of Dan to further augment his Qi. But, even with his progress, Rio soon discovered from Kata and Rageku that he must eliminate the Fierce Beast-Fist fighters, as well as all remnants of their training still within him, thus risking further limiting of his power. Rio then, through a Confrontation Command Ceremony (臨命式, Rinmeishiki), swearing absolute loyalty to the Confrontation Beast-Fist and the destruction of the Fierce Beast-Fist school, purging himself of all traces of the Beast Arts.

Though he easily defeats the Gekirangers in battle, he spared them after witnessing Jan manifesting Extreme Ki, the very same power possessed by Dan. He soon took Sha-Fu as a hostage in turn for allowing the Gekirangers incentive to achieve the Extreme Ki power, as Sha-Fu claims it would be a much more fulfilling victory. But it was holding Sha-Fu hostage, that Rio's fear of his past still haunts in spite of becoming stronger. Rio, refusing to accept the identity, attempted to kill Retsu Fukami and Ran Uzaki until Jan defeats him as Super GekiRed. With their fight leaving him wounded in both body and pride, Rio realized Jan's relation to Dan and refuses to accept this "humiliating defeat".

As a result, and being in a state of rage, he resurrects Maku to learn from him. However, Maku overthrew Rio with no intent to teach him how to master the Fury Confrontation Ki, relegating Rio to an unwitting subordinate. But, over time, Rio's frustration and anger would gradually build, ultimately manifesting Fury Confrontation Ki. However, Rio's Fury Confrontation Ki was only a spark compared to Maku, leading him to attack Gorrie Yen to learn of Beast Origin Village and the power it holds. But after learning he needs the Virtuous Beast Sword to enter it, Rio battled Maku upon returning until Mele stopped it and Rio is imprisoned. However, Mele soon frees Rio and presents him the Virtuous Beast Sword so he can make his way to the Beast Origin Village. Though Maku attempted to punish him, Rio is defiant by saying that he doesn't care about the Fist Demons or their desires as long as they stay out of his way.

After the awakening of his potential due to Beast-Fist God SaiDain's Beast Power Blooming, Rio realizes that now he and the others exposed to it are all now stronger than even Maku himself. Confirming it after challenging GekiRed to test his theory that the Gekirangers' potential is also unleashed, Rio tells GekiRed to defeat Maku and end to the war between their mentors so that their own war may commence. Upon Maku's defeat, Rio resumes his place as sole leader of the Confrontation Beast Hall as Long finally reveals himself and offers Rio greater power under the Mythical Beast-Fist's guidance. At first, Rio didn't believe Long's words that he is destined to become the Mythical Beast King. However, after facing Suugu and revealing his ties to Jan, Rio undergoes the Blood-Oath Ceremony, gaining a new fighting form, Mythical Beast King Rio (幻獣王リオ, Genjūō Rio), that gives him mastery over the Mythical Beast Gryphon-Fist (幻獣グリフォン拳, Genjū Gurifonken) style. Though the stronger one, Rio spares Jan and the Gekirangers so the former may train for their final confrontation.

Though Rio was later defeated in that battle, it actually allowed him to fully awaken as the Destroyer, his mind corroded into animistic savagery, bent on destroying everything. In this state he turned into a giant and not even Beast-Fist Giant God SaiDaiOh could stop him, but his feelings for Mele restore him as she tells him that Long used them. After fully learning the identity and that everything he lived for was a lie, a devastated Rio is forced to watch Long abduct Mele, the reason he was able to return to his normal self. But thanks to Jan's words, Rio gains a new purpose in life and joins the Gekirangers in rescuing Mele and fighting Long as an act of his own will, renouncing his position as the Mythical Beast King in the process.

After Long's defeat, Rio is invited to SCRTC along with Mele. However, only Ran and Retsu are reluctant to have them live with them, and so Rio decides to undergo the Fist Judgment with full knowledge that it may kill him in the process. After burning down the Confrontation Beast Fist to symbolize the end of the Beast Fist branch, Rio takes on Retsu in the Fist Judgment, with the intention to sacrifice himself. However, Sanyo and a revived Long interrupt the proceedings as Long assumes his true form.

After Mele's selfless sacrifice, Rio takes a small remnant of her Ki into himself and decides to eliminate Long, despite Jan's protests. As a final act, he gives the Gekirangers the last remaining Confrontation Ki that was given to him by the Fist Demons as penance for his deeds, and sacrifices himself in order to stop Long's rampage, promising Jan a rematch in the future.

Upon arriving in the afterlife, he is met by Mele and the two walk off, hand in hand. During the finale, both Rio and Mele guide the three Gekirangers into the Confrontation Beast Hall and reveal the Fist Demons before them, showing the path to unifying the two Beast Fist schools. In the end Rio is reincarnated as an adolescent boy whom Jan takes under his tutelage as his disciple.

Rio is temporarily revived during the events of Go-Onger vs. Gekiranger.

Rio revived again to fight in the Great Legend War.

TV STORY-Gokaiger Goseiger Super Sentai 199 Hero Great Battle Like everyone else's, his powers formed a Ranger Key which was later taken by the Gokaigers from Basco ta Jolokia.

TV STORY-Ep. 31: Crash!! Secret Operations After the defeat of Ackdos Gill, the Gokaigers return the Ranger Keys to their original owners. Due to Rio's deceased state, it is assumed its return was a symbolic measure as opposed to the actual return of his powers. It is unknown if he could still transform although dead like Yamato Tribe Prince Burai, Naoto Takizawa, Mikoto Nakadai and Gai Yuki did.

In Nobuo Akagi/AkibaRed's roll call in the twelfth episode of Hikonin Sentai Akibaranger, which served as the finale of the first season, he says that "[his] favorite Final Battle is that of Jan and Rio."

These Ringi are performed by Rio:

These Gengi are performed by Rio:

Rio has a leitmotif: "Ferocious Like a Lion" which is prominent in scenes involving him such as his transformation into his Black Lion form. Rio's actor, Hirofumi Araki, sings Rio's theme song "Dark Pulse ~Unwavering Desire~". 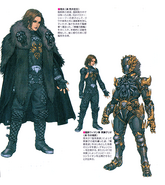 The Black Lion Rio Ranger Key (黒獅子リオレンジャーキー, Kurojishi Rio Renjā Kī) is Rio's personal Ranger Key and what became of his powers after he along with the rest of the 34 Super Sentai sacrificed their powers to end the Great Legend War.

This key, along with the other nine extra hero keys and the fifteen sixth ranger keys, were initally acquired by Basco ta Jolokia and later used by the Gokaigers. Like all of his Ranger Keys, Basco used his trumpet, the Rapparatta, to turn the Rio key into a puppet to do his bidding. Basco summoned Zubaan with Rio and Mele in his failed attempt to gain the greater power of GoGo-V. They were all defeated, but the three keys were recovered by Sally. Basco later united his nine remaining Ranger Keys when he was confronted by Goro Hoshino (OhRed†). The Extra Heroes would then fight the Gokaigers again, who wished to earn the right to the Ohrangers' greater power rather than just be given it. Rio and Mele fought Joe Gibken (Gokai Blue), who fought as OhBlue. The Rio key, along with the rest of the Extra Hero keys, was claimed by the Gokaigers.

While in the possession of the Gokaigers, the Rio Ranger Key was used once by Don Dogoier (Gokai Green).

After Zangyack were finally defeated, the Gokaigers gave the Ranger Keys back to their rightful owners. It is presumed that Rio received his key despite being in the afterlife.

Interestingly, as shown in the Gokaiger Ranger Key Book Volume 1, the team symbol for this key is the triangular Rinjuken Akugata symbol, rather than the claw scratch symbol of the Gekirangers.

Rio is among the vast pantheon of heroes which are available in the mobile game Super Sentai Battle Base, with his human form and Mythical Beast King form being available as well.