Rin of the Heavenly Wind Star

Of the Dairangers, she has the most powerful psychic senses. She has mastered deadly wind power. It's not known if Master Kaku was her blood relative or if 'uncle' was just a title. At the heart a gentle, kind soul, Rin is also terribly shy. Rin's heart was fierce and strong. She was very intelligent and difficult to con because one would have to be very sneaky to get past her. She loved her teammates, her Uncle Kaku, her family, with the warmth and strength most people do not have to spare.

A Japanese schoolgirl ignored Rin's shyness to welcome her to Japan. Rin's Japanese was nearly perfect and though she had left China, she was the person on her team who seemed to have the most attachments back home. For example there was her little brother, Roudoshi Guhon. At first he embarrassed the heck out of her, however she loved him very much, but he was the one who had designed the Dairanger's battle equipment and their suits which they summoned with the ki-spark of their will. Rin went into considerable shock when she found out her great uncle was engaged to be to a twenty-year-old woman.

Rin's strong kiryoku led her to have visions, as the blood of the Dai ran most smoothly in her veins. Even when she was most uncertain of herself, she would brave through anything. She faced the Lipstick Woman for the sake of her school. She reassured Ryou when he was upset over losing to Jin and helped Shouji out when there was a girl he had a terrible crush on.

When the 3 Stupid Gohma convinced Shouji to throw the baseball game, it was Rin who doubted their word. It was also she who brought out the big guns in the game, arriving at the plate dressed in a skirt which showed her thighs and rattled the Gorma pitcher thoroughly. And though it was hard at first, she eventually allowed Kou to live with her, not knowing he was really the mysterious Kibaranger. It was hard living with him because he tended to look up her skirt and touch her breasts. She only knew he was probably an orphan and an obnoxious one at that. She eventually took to mothering Kou more than tolerating him, loving the kid as he tended to grow on you.

On Christmas, it was Kou’s birthday but he had just lost his mother after they were briefly reunited. Even though she could barely muster a positive emotion as well, she encouraged him to be in high spirits and had a lovely Christmas dinner together and were satisfied to know that at least they had each other. She later met this handsome photographer while returning from shopping. Together they nursed an injured bird, and he convinced her to become a idol. She found him gentle, attractive and intriguing, she agreed in order to spend as much time with him as she could. And she fell in love with him. Unfortunately, what she did not know was that he was really a Gorma sent to use her vanity to trap her, sent by Gara. But when he found out that she didn't do this for vanity, but rather for of him, he was totally stunned. And he fell in love with her, which ended up costing his life. She swore she would never forget him, nor the short time they had together. Years after they won the war, she at the age of 68 saw her successor/granddaughter Yo fight a New Gorma in Dairenou.

She once fell in love with the photographer Shoichi Takamura, who was actually the alter-ego of Gorma Media Magician.

Multiple copies of HououRanger were created by Copy Empress using photos she took of the Dairangers. The first was a human clone created during a day at the pool; while a second was created alongside the first in order to double-team the respective Dairanger. A third was created in a team meant to face KirinRanger before he destroys all the clones with his Rod Arrow.

Later, Rin, alongside her team, joined forces with the Fivemen, Jetmen, Zyurangers, and Kakurangers to defeat the evil Emperor Daidas and his forces.

HououRanger is among the Sentai warriors seen in clips when Miku Imamura (MegaPink) lectured Sae Taiga (GaoWhite) about the past female Super Sentai warriors and their shared mastery of disguise and habit of changing their clothing in the blink of an eye, something that Sae had never done before.

Years later, Rin fought alongside not only her own team, but every single Sentai Ranger in existence, against the Empire of Zangyack when it attacked the Earth in the Great Legend War. After fighting against hundreds of Gormin and their Zgormin commanders. Kaijou noticed the fleet moving towards them, he gathered all the Rangers together and gave them the order to sacrifice their powers to wipe out the first invasion's armada. The Houou Ranger powers are later utilized by Ahim de Famille via the Ranger Keys.

After the Gokaigers finally defeat Zangyack invasion force on Earth and the emperor they return all of the Ranger Keys to their original owners. Her teammates Shoji and Kazu were seen receiving their Ranger Keys, so is assumed Rin also has her powers back.

Rin, alongside her team (bar KibaRanger), among the majority of the Super Sentai heroes, was caught up in the "Super Hero Taisen" incident which eventually resulted in the Super Sentai teams and Kamen Riders joining forces to defeat both Dai-Zangyack and Dai-Shocker. During the final battle, she is seen fighting the Questers Gai and Rei.

HououRanger appeared with her team among the first 38 Super Sentai whom collectively empowered Wild Tousai Shuriken King in its fight against the titanic Gillmarda, granting the Ninningers and Zyuohgers the power to perform the Zyuoh Ninnin Super Sentai Burst which destroyed Gillmarda with the combined power of all 40 Super Sentai.

, competing for the title of Kamen Sentai Gorider, with HououRanger as candidate for Momorider. However, the Dairangers were beaten in the first round by Team Ex-Aid

As HououRanger, Rin uses a variation of Eagle Claw which enables her to control wind. 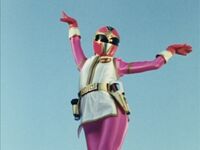 In the original concept of Dairanger titled Chuuka Sentai Chinaman, HououRanger is present as one of the five Dairangers, with minor costume differences.

The HououRanger Ranger Key (ホウオウレンジャーレンジャーキー, Hōō Renjā Renjā Kī) is Rin's personal Ranger Key and what became of her powers after she along with the rest of the 34 Super Sentai sacrificed their powers to end the Great Legend War.

This key along with the majority of the Ranger Keys were collected by the Red Pirates and later used by the Gokaigers. The HououRanger Ranger Key was mainly used by Ahim de Famille (Gokai Pink), who used it to fight as HououRanger.

The Dairanger keys, along with all the Ranger Keys of the first 33 Super Sentai, were briefly taken by the Black Cross King and turned into Ranger puppets that were fought by the Gokaigers and the Goseigers. Splitting up, the puppet HououRanger was defeated as part of a group of surviving Pink White warrior keys by Gokai Pink and Super Gosei Pink.

After Zangyack were finally defeated, the Gokaigers gave the Ranger Keys back to their rightful owners. It is presumed that Rin received her key and became HououRanger once more.

Rin of the Heavenly Wind Star/HououRanger: to be added

HououRanger is among the vast pantheon of Rangers which are available in the mobile game Super Sentai Battle Base.

HououRanger appears with his team among all Sentai in the mobile game Super Sentai Legend Wars.