Riki (リキ, Riki) is KingRanger (キングレンジャー, Kingu Renjā) of the Ohrangers. He is the legendary child-like hero of Pangaea who chased Emperor Bacchus Wrath off Earth 600 million years ago.

He first appeared, reviving from suspended animation and is the protector of Dorin. After the final battle with Kaiser Buldont & Princess Multiwa he leaves with Dorin.

KingRanger is among the Sentai warriors seen in clips when Yuusuke Amamiya (Red Falcon) lectured Gaku Washio (GaoYellow) about the past Sentai sword experts, showing him that the true sword wasn't the sharpest, but the one that feeds on courage.

Years later, Riki fought alongside not only his own team, but every single Sentai ranger in existence, against the Empire of Zangyack when it attacked the Earth in the Great Legend War. After fighting against hundreds of Gormin and their Zgormin commanders. Akarenger noticed the fleet moving towards them, he gathered all the Rangers together and gave them the order to sacrifice their powers to wipe out the first invasion's armada.

After the defeat of Ackdos Gill, Captain Marvelous returned all the Ranger Keys to the former Sentai heroes. It is assumed Riki and his teammates received their keys, allowing for them to utilize their powers once again.

KingRanger appeared with his team among the first 38 Super Sentai whom collectively empowered Wild Tousai Shuriken King in its fight against the titanic Gillmarda, granting the Ninningers and Zyuohgers the power to perform the Zyuoh Ninnin Super Sentai Burst which destroyed Gillmarda with the combined power of all 40 Super Sentai.

Riki joined the Super Sentai Strongest Battle as a member of Gilded Team. It’s unknown whether he participated in any of the matches, but his team was eliminated after losing the third round against the Super Strong Team. 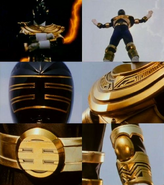 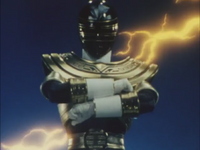 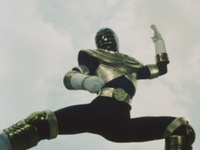 The KingRanger Ranger Key (キングレンジャーレンジャーキー, Kingu Renjā Renjā Kī) is Riki's personal Ranger Key and what became of his powers after he along with the rest of the 34 Super Sentai sacrificed their powers to end the Great Legend War.

This key, along with the other fourteen sixth ranger keys and the ten extra hero keys, were initially acquired by Basco ta Jolokia and later used by the Gokaigers. Like all of his Ranger Keys, Basco used his trumpet, the Rapparatta, to turn the KingRanger key into a puppet to do his bidding. The copy KingRanger was one of the first five sixth rangers that Basco shown Captain Marvelous (Gokai Red), revealing he had found more Ranger Keys. These five puppets fought the Gokaigers and were all defeated, with KingRanger being defeated by Gokai Yellow. Basco left these five keys to Marvelous.

A short while after, the first fourteen Sixth Ranger Reys, along with all the Ranger Keys of the first 33 Super Sentai, were briefly taken by the Black Cross King and turned into Ranger puppets that were fought by the Gokaigers and the Goseigers. The KingRanger key was among ten of these Sixth Ranger Keys who fought, and were defeated by, Gosei Knight.

While in the possession of the Gokaigers, the KingRanger Ranger Key was mainly used by Gai Ikari (Gokai Silver), who used it to fight as KingRanger.

After Zangyack were finally defeated, the Gokaigers gave the Ranger Keys back to their rightful owners. It is presumed that Riki received his key and became KingRanger once more.

KingRanger appears with his team among all Sentai in the mobile game Super Sentai Legend Wars.