A train-themed giant robo piloted by the ToQgers. It is armed with the crossing gate-themed Railway Crossing Sword (フミキリケン, Fumikiriken) which can switch between Sword and Gun Modes much like the ToQ Blasters, only the modes are announced by railway bell warnings that last for a couple of seconds.

The Ressha also serve as the base of the ToQgers. When the Ressha are close to an area occupied by Shadow Line forces, the lights in the interior go out for 2 seconds.

However, other finishers are also demonstrated in the series. Among them are:

The Resshas arrive at a station taken over by Shadow Line. Saber Shadow challenges ToQ 1gou to a duel using their trains. ToQ 4gou tells ToQ 1gou to connect with his train so he can do the driving. After the duel between ToQ 1gou and Saber Shadow, ToQ-Oh is formed to combat the enlarged Saber Shadow. Saber Shadow proposes a duel with ToQ-Oh with guns. Saber Shadow cheated and turned in their fourth step but ToQ-Oh counters by doing a Gattai Release manuever.

TV STORY-Station 2: We Are Here

After the ToQgers defeat Stove Shadow they summon their Resshas to combat the enlarged monster. Suddenly two Kuliners become Kuliner Robos and ToQ-Oh gets outnumbered and then they are given the Shield Ressha to have an upper hand against their enemies.

TV STORY-Station 4: Be Aware of the Things You Lose

After the ToQgers had a little talk, they arrived at Zawame City

, where they soon found trouble in the form of the Underground Badan Empire and a Lion Inves

. After the ToQgers defeated the Berserker Inves with a combined shot of the Scope Ressha-enhanced ToQ Blaster, it grew giant by eating several premature Lockseeds. The ToQgers uses ToQ-Oh Car Carrier and Tank against the enlarged Inves

was told about the battle between the Inves and ToQ-Oh, but does not believe them despite the battle taking place nearby his location in the tower.

. Forming ToQ-Oh to take on the Generalissimo of Badan

When the ToQgers (without Tokatti) arrive to fight Type Shadow, Type Shadow shows his power by writing a title that made the ToQ Ressha go away from the ToQgers. After Type Shadow is defeated he becomes giant-sized, the ToQgers are told that the ToQ Resshas are in space and can not return to them. The ToQgers used Diesel-Oh instead of ToQ-Oh. During the fight, Diesel-Oh types the return of ToQ Ressha. Right, Mio, Hikari and Kagura transfers to their respective Resshas and forms ToQ-Oh. ToQ-Oh and Diesel-Oh's Ressha Slash and Spinning Kick defeated the enlarged Type Shadow.

At one point, General Schwarz had managed to hijack the Ressha from the ToQgers, and form ToQ-Oh to fight them, and despite the combined efforts of Diesel-Oh and Build Dai-Oh, the two mechas were beaten (partly due to Empress Gritta's interference in the Imperial Kuliner Robo), but eventually, the ToQgers managed to retrieve the core Ressha.

TV STORY-Station 22: The Birth of the Empress The ToQ Resshas were finally reclaimed by the ToQgers after Right posed himself as his teammates in Transfer Changes to divert several Combatant Kuros and Schwarz.

The Red Ressha (レッドレッシャー, Reddo Ressha, Red Train) is ToQ 1gou's steam locomotive mecha. When in full form, the engine is connected to a coal tender and two passenger coaches. It forms the head & middle torso of ToQ-Oh. During emergencies of a specific nature as ToQ-Oh, Red Ressha can unfold itself in a forward fashion to smash through anything in its path.

The Blue Ressha (ブルーレッシャー, Burū Ressha, Blue Train) is ToQ 2gou's bullet train mecha. When in full form, the engine is connected to a middle coach and a rear engine. It forms the right leg and right torso of ToQ-Oh.

The Yellow Ressha (イエローレッシャー, Ierō Ressha, Yellow Train) is ToQ 3gou's subway train mecha. When in full form, the engine connects to a second car. It forms the right arm of ToQ-Oh. As a part of ToQ-Oh, it can extend for the ToQ-Oh Punch (トッキュオーパンチ, Tokkyūō Panchi) attack.

The Green Ressha (グリーンレッシャー, Gurīn Ressha, Green Train) is ToQ 4gou's bullet train mecha. When in full form, the engine connects to a middle coach and a rear engine. It forms the left leg and left torso of ToQ-Oh. As a part of ToQ-Oh, it can extend for the ToQ-Oh Kick (トッキュオーキック, Tokkyūō Kikku) attack.

The Pink Ressha (ピンクレッシャー, Pinku Ressha, Pink Train) is ToQ 5gou's subway train mecha. When in full form, the engine connects to a second car. It forms the left arm of ToQ-Oh.

The Support Ressha (サポート烈車, Sapōto Ressha) are a series of auxiliary Ressha the ToQgers and ToQ-Oh can use when the standard Ressha are not enough. They are summoned through the ToQ Changer and their respective ToQ Ressha. They can combine with ToQ-Oh with the command of "Ressha Armament" (烈車武装, Ressha Busō).

Most of the Support Ressha have been lost during the expansion of the Shadow Line, cutting them off from the Rainbow Line, making it the secondary mission of the ToQgers to find the lost Ressha before General Schwarz takes them for his own.

n/a
ToQ-Oh Shield (トッキュウオーシールド, Tokkyūō Shīrudo) is the formation where ToQ-Oh is armed with the Shield Ressha on its forearm, replacing the front of Pink Ressha.

In this form, Toq-Oh lacks any new finishing moves and primarily uses the Shield Ressha to increase its defensive capabilities. Attacks include Signal Shield (シグナルシールド, Shigunaru Shīrudo), where it deflects any energy shots that hit the shield; and the Signal Shield Beam (シグナルシールドビーム, Shigunaru Shīrudo Bīmu), where the five lights on the Shield Ressha fire 5 energy beams simultaneously.

14,500,000
ToQ-Oh Car Carrier (トッキュウオーカーキャリア, Tokkyūō Kā Kyariā) is the formation where ToQ-Oh is armed with the Car Carrier Ressha on its forearm, replacing the front of Yellow Ressha.

ToQ-Oh Car Carrier before it shoots the cars.

13,400,000
ToQ-Oh Tank (トッキュウオータンク, Tokkyūō Tanku) is the formation where ToQ-Oh is armed with the Tank Ressha on its forearms, replacing the front of Yellow and Pink Ressha.

In this formation, ToQ-Oh gains increased punching power and speed akin to a boxer. Its finisher is the Tank Upper (タンクアッパー, Tanku Appā), where ToQ-Oh throws an explosively powerful uppercut to the target's chin, sending it skyward.

n/a
ToQ-Oh Car Carrier Tank (トッキュウオーカーキャリアタンク, Tokkyūō Kā Kyariā Tanku) is the formation where ToQ-Oh is armed with both the Car Carrier and Tank Ressha on its forearms, with the former replacing the front of Yellow Ressha, and the first half of the latter (which normally goes where Yellow Ressha is) replacing the front of Pink Ressha. It was first used against an Armor Evolved Lion Inves, who somehow enlarged itself by gorging on two premature Lockseeds.

13,600,000
ToQ-Oh Police (トッキュウオーポリス, Tokkyūō Porisu) is the formation where ToQ-Oh is armed with the Police Ressha on its forearms, replacing the front of Yellow and Pink Ressha.

n/a
ToQ-Oh Drill (トッキュウオードリル, Tokkyūō Doriru) is the formation where ToQ-Oh is armed with the Drill Ressha on its forearm, replacing the front of Pink Ressha.

n/a
ToQ-Oh Build (トッキュウオービルド, Tokkyūō Birudo) is the formation where ToQ-Oh is armed with the forearms of Build Ressha on its forearms, replacing the front of Yellow Ressha and Pink Ressha.

The ToQgers formed this combination, when ToQ 6gou beat them to using the Tank Ressha and combined it with Build Dai-Oh. With the top deck of Build Ressha unused, they decided to use it in a combination instead.

n/a
ToQ-Oh Claw (トッキュウオークロー, Tokkyuuōkurō) is the formation where ToQ-Oh is armed with the Claw Ressha on its forearm, replacing the front of Yellow Ressha.

n/a
ToQ-Oh DenLiner (トッキュウオーデンライナー, Tokkyūō Denrainā) is the ToQgers' version of DenLiner which is formed from the Den-O Ressha which replaces Red Ressha in ToQ-Oh. It lasts all of five seconds before the Kyoryuger Ressha knocks it out of position due to Kyoryu Red's proclamation that Momotaros was doing it wrong.

. Originally, it was ToQ-Oh Den-O as Momotaros

docked DenLiner in Red Ressha's position. However Kyoryu Red wanted to do what Momo had done and literally rams the DenLiner out of position with the Gabutyra Ressha, forcing him into the legs, something Momo resents.

The combination's ultimate attack is the "ToQ Brave Sanjou Slash". Its callsign, given by Momotaros, is "Ore Gattai!" (lit. "I have Combined")

The personal ToQ Ressha of the five ToQgers which they use to transform into their respective color-coded forms, which they can switch via the Transfer Changes. 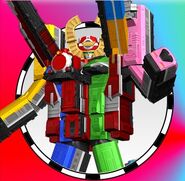 ToQ-Oh is among the vast pantheon of Mecha which are available in the mobile game Super Sentai Battle Base.