SafariGaOh is formed by the five Safari Ressha (サファリレッシャー, Safari Ressha) through the Ressha Gattai (烈車合体, Ressha Gattai lit. "Train Combination") command. While the robot itself is modeled after ToQ-Oh, it first appeared as a giant lion formation before switching to its Robo Mode (ロボモード, Robo Mōdo). In its lion formation, the SafariGaOh can use its claws as its primary weapon and can levitate itself, even allowing the ToQ-Oh to ride on it.

In the Robo Mode, it retained the claws from its animal mode and wields an unnamed sword themed after a lion tail. Its finisher attack is ToQ Safari Double Kick (トッキュウサファリダブルキック, Tokkyuu Safari Daburu Kikku), where both ToQ-Oh and SafariGaOh slide on a pair of railways that bring them to their target before delivering flying kick attacks.

50 years prior, after humanity's first attempt to enter space, their Imagination greatly increased which allowed the Safari Ressha to travel into space, returning to Earth once in 25 years. While space stations were established, not many of them existed due to the decreasing rate of Imagination.

However in 2014, the train was attacked by Count Nair within his Kuliner during its return to Earth. Four of the Safari Ressha were lost in space, leaving the Lion Ressha that Lady piloted to crash-land on Earth. While the ToQgers fought Count Nair and the Hound Shadow, Lady kidnapped Right and attempted to use his Imagination energy but to no avail, having not enough supply. The ToQgers decided to help her, linking their core Ressha to the Lion Ressha and creating a jump-off platform to deliver it to space.

While the other ToQgers were busy fighting the Shadow Line, Right piloted the Ressha and used his Imagination to create half of the rail with Count Nair in pursuit. However thanks to the Conductor and Ticket via the Fire Ressha, several citizens finally witnessed the ToQ Ressha, fueling up their Imagination to the half platform and completing it, allowing the Lion Ressha to continue into space.

While the ToQgers in ToQ-Oh had a hard time battling the fused Giant Nair Hounder, Lady and the Safari Ressha team returned, with ToQ 1gou piloting it to form SafariGaOh and joined his teammates, allowing the two mecha to finish the gigantic colossus. After the battle, Lady bid the team farewell while the Safari Ressha departed for space once more.

Lion Ressha (ライオンレッシャー, Raion Resshā) is a steam locomotive Ressha themed after a lion. Much like Red Ressha, when in full form, the engine is connected to a coal tender and two passenger coaches. It forms the head and middle torso of SafariGaOh.

By itself, Lion Ressha is capable of creating vacuum from its mouth to forcefully drag a targeted person aboard.

Eagle Ressha (イーグルレッシャー, Īguru Resshā) is a Shinkansen themed after an eagle. It forms the rear right leg of SafariGaOh's animal mode and the main right leg of its robot mode.

Wildcat Ressha (ワイルドキャットレッシャー, Wairudokyatto Resshā) is a commuter rail themed after a wildcat. It forms the front left leg of SafariGaOh's animal mode and the left hand of its robot mode.

Alligator Ressha (アリゲーターレッシャー, Arigētā Resshā) is a Shinkansen themed after an alligator. It forms the rear left leg of SafariGaOh's animal mode and the main left leg of its robot mode.

Panda Ressha (パンダレッシャー, Panda Resshā) is a commuter rail themed after a panda. It forms the front right leg of SafariGaOh's animal mode and the right hand of its robot mode.

ToQ 1gou Lion
Add a photo to this gallery 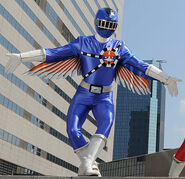 ToQ 2gou Eagle
Add a photo to this gallery

ToQ 3gou Wildcat
Add a photo to this gallery

ToQ 4gou Alligator
Add a photo to this gallery

ToQ 5gou Panda
Add a photo to this gallery

Retrieved from "https://powerrangers.fandom.com/wiki/Ressha_Gattai_SafariGaOh?oldid=967636"
Community content is available under CC-BY-SA unless otherwise noted.