"So displeased to meet you!"
―Repellator's first words when kneeling before Rita in the palace[src]

"There's even more of me to fear!"
―Repellator when grown.[src]
"One down and one to go. Why don't you just give it up White Ranger?"
―Repellator after taking down the Thunder Megazord and his final words before his demise.[src]

Repellator was a green tick monster that served as the central antagonist of the episode "A Friend in Need".

Lord Zedd, seeing as how the Power Rangers are on Edenoi, decides to take advantage of the situation and has Finster create Repellator despite his doubts it will do any good. Repellator immediately transports to a park outside of Angel Grove where  he runs into Kimberly who has remained on Earth due to suffering from a cold. Their battle ends in a stalemate as, though he is able to scramble Kimberly's molecules upon touch and make her more ill, he also catches her cold.

A now-sick Repellator returns to the Moon Palace to meet Zedd's and Rita's wrath and beg for something to take for his cold. He is sent to Finster and though Finster advises 7 to 10 nights bed rest, Repellator urges him to just give him something to feel temporarily better. He refuses Finster's inoculation but accepts his medicine before the Repellator returns to Earth. Feeling refreshed, the medicine has enhanced him with the ability to throw his scrambling powers as Disruptors. He finds Bulk and Skull pretending to be Power Rangers to a couple of girls and goes after them before Zedd enlarges him with a Growth Bomb. However, just then he finds that the Rangers have returned from Edenoi, they confront him with Thunder Megazord and White Tigerzord. Both zords fight Repellator and defeat him with the Thunder Saber's energy slash.

Repellator showed a high respect for Rita and Zedd, saluting them upon their first meeting and being afraid upon his return that he had disappointed them. 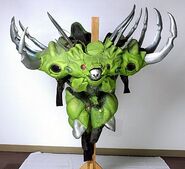 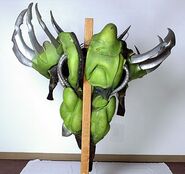