The Red Mighty Morphin Power Ranger can refer to: 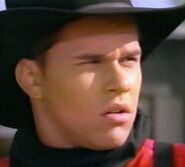 Rocko, ancestor of Rocky DeSantos and the first (known) human to utilize the Red Power Coin as the Red Wild West Ranger.
Add a photo to this gallery 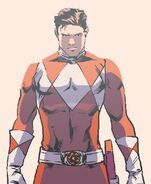 Jason Lee Scott, Jason's counterpart from the World of the Coinless who fell in battle against Lord Drakkon. 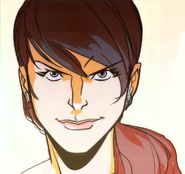 Grace Sterling, who briefly served as the Red Mighty Morphin Power Ranger in 1969 as seen in Boom! Comics series. 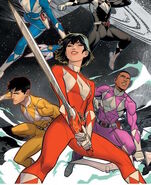 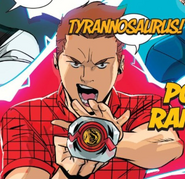 Rocky DeSantos, the Red Mighty Morphin Power Ranger seen in the Boom! Comics series.
Add a photo to this gallery

Red Ranger may use Green Ranger's Dragon Shield for more power. (The S.H. Figuarts toy of this figure retroactively labels this look as "Armored Red Ranger", being previously unnamed)

As The Red Ninja Ranger of the Mighty Morphin Power Rangers.

Also, like the other Ninja Rangers, he gained powers unique to his animal: In Rocky's case, enhanced strength and the ability to quickly climb up surfaces.

When the Red Ranger dons metallic armor, the white in his suit is replaced with a light silver coat. The red in his suit becomes metallic. In this form he can execute high speed martial arts moves with added metal-like impact.

With the Red Ranger powers taken by the Black Dragon, Tommy Oliver sacrificed his powers to activate the powers of the other Rangers.

In the toyline, Jason has an Armored Red Mighty Morphin Ranger Key for his form when he uses the Dragon Shield. This makes Jason the only Ranger in the Power Rangers universe to have a key made for his Super Form.

Red Turtle Ranger
Add a photo to this gallery

Retrieved from "https://powerrangers.fandom.com/wiki/Red_Mighty_Morphin_Power_Ranger?oldid=952299"
Community content is available under CC-BY-SA unless otherwise noted.