Ranru is 22 years old at the beginning of Abaranger.

Her Burstosaur partner is Ptera.

In the finale, Ranru goes to work at a racetrack.

In 2023, Takaki Utsumi won the Nobel Prize for Physics thanks in part to Ranru having inspired his confidence as a child twenty years earlier. Retaining only a photograph of her cycling off taken from the back, Takaki gave his thanks in spirit to the woman, whose name he remained unaware of.

Ranru along with Ryouga and Yukito are arrested by the Dekarangers for destruction of property. However it later transpired that they were hunting an enemy and are released.

While Ban and Ryouga are talking to the CEO of the Curry Resteraunt Yatsudenwani, Yatsudenwani accidently mistakes Ban for Ranru and attempts to kiss Ban, indicating that Yatsudenwani has some sort of crush on Ranru.

Ranru's appearances in the "Versus Series", Abaranger vs. Hurricaneger and Dekaranger vs. Abaranger, are featured in the Super Sentai Versus Series Theater, hosted by the heroes of Tensou Sentai Goseiger. Moune (Gosei Yellow) also dresses as Ranru in the Abaranger cosplay.

Years later, Ranru fought alongside not only her own team, but every single Sentai ranger in existence, against the Empire of Zangyack when it attacked the Earth in the Great Legend War. After fighting against hundreds of Gormin and their Zgormin commanders. Akarenger noticed the fleet moving towards them, he gathered all the Rangers together and gave them the order to sacrifice their powers to wipe out the first invasion's armada.

In the first episode of Hikonin Sentai Akibaranger, Nobuo Akagi compared himself to Ranru when he was recruited by Hiroyo Hakase. He noted that Ranru received her Dino Brace after stopping a mugging, just as Nobuo attempted to do, but his daydreaming of stopping the mugger interrupted him, resulting in the victim saving herself by throwing Nobuo's bike at the mugger.

Ranru, alongside Ryouga and Yukito (AbareBlack and AbareKiller were absent), among the majority of the Super Sentai heroes, was caught up in the "Super Hero Taisen" incident which eventually resulted in the Super Sentai teams and Kamen Riders joining forces to defeat both Dai-Zangyack and Dai-Shocker. During the final battle, she is seen in the background fighting Rat Fangire.

"Sorry to keep you waiting!"
―Ranru[src]

Ranru joined with Yukito during the crisis of Space War God Borudosu and, after reuniting with Ryouga, fought alongside their fellow Kyoryu Super Sentai: Zyuranger and Kyoryuger, against the forces that Borudosu had assembled. Forming a "Ptera Assembly" with her fellows PteraRanger and Kyoryu Gold, AbareYellow fought through the horde of Barmia Soldiers, Zorima and Golem Soldiers. Following this, she joined with her teammates to defeat Neo-Geilton - the reincarnation of their original enemy - with the Dino Bomber, before combining their cannons with their fellow Kyoryu Super Sentai to form the Ultimate Howling Cannon which they used to defeat Neo-Grifforzer who sacrificed himself to allow Borudosu to assume his true form. Boarding the AbarenOh which transformed from a Bakuryuu Tyrannosaurus replica provided by the Abaranger Zyudenchi, the Abarangers fought alongside the Zyurangers' Daizyuzin and the Kyoryugers' Kyoryuzin against the behemoth and, once the Go-Busters provided their power to form Tategami Raiden Kyoryuzin, combined their power with the other Kyoryu Super Sentai to finally defeat Borudosu, after which they and the Zyurangers took their leave.

AbareYellow appeared with her team among the first 38 Super Sentai who collectively empowered Wild Tousai Shuriken King in its fight against the titanic Gillmarda, granting the Ninningers and Zyuohgers the power to perform the Zyuoh Ninnin Super Sentai Burst which destroyed Gillmarda with the combined power of all 40 Super Sentai.

Ranru is a sanguine technology mistress who owns a German BD-1 bicycle she nicknamed "Birdie." All she really wants is peace. She was formerly trained to be an idol, but Ranru hated it and left to work in the mechanical field. She is interested in anything mechanical, can create her own devices, and is a genius in mechanics.

Ranru used to be afraid of nattō until she was forced to conquer it during a battle with a Trinoid. Ranru carries a small camera with her and usually snaps photos of the enemy during mid-battle to come up with a strategy on how to defeat it. She sometimes has an itchy back and often wants others to scratch it for her. 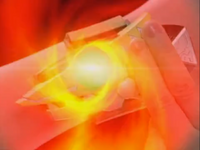 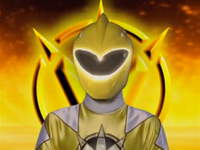 In this form, AbareYellow's fighting style is similar to a Pteranodon, by sprouting wings under her armpits then grabbing her enemies by her feet, then slamming them into nearby objects before dropping them.

As noted by Hoji Tomasu in Dekaranger vs. Abaranger, Ranru's last name is loosely derived from Juraki (ジュラ紀, Juraki), which the Japanese term for the Jurassic period (the kanji for Itsuki can also be read as "Ju").

The AbareYellow Ranger Key (アバレイエローレンジャーキー, Abare Ierō Renjā Kī) is Ranru Itsuki's personal Ranger Key and what became of her powers after she along with the rest of the 34 Super Sentai sacrificed their powers to end the Great Legend War.

This key along with the majority of the Ranger Keys were collected by the Red Pirates and later used by the Gokaigers. The AbareYellow Ranger Key was mainly used by Luka Millfy (Gokai Yellow), who used it to fight as AbareYellow.

After Zangyack were finally defeated, the Gokaigers gave the Ranger Keys back to their rightful owners. It is presumed that Ranru received her key and became AbareYellow once more.

AbareYellow is among the vast pantheon of Rangers which are available in the mobile game Super Sentai Battle Base, with her Abare Mode being available as well.

AbareYellow appears with his team among all Sentai in the mobile game Super Sentai Legend Wars.