Ep. 1: The Great Gathering of 10 Sentai: Counting on You! Turboranger

He was the last of the original four bad guys serving Lagorn to be killed. He was not in good graces with Lagorn for his cowardice (and serves as a scapegoat after the death of Lehda, he also tried to use Zulten Metal Type to win his position back) and remained hidden at times afterward but shows up at times especially after Layda's death and during the arrival of Yamimaru and Kirika and remained unable to help his master during the battle of Red Turbo and Lagorn due to the red thread barrier placed by Yamimaru. He sided with the Wandering Bōma fearing his death but returned loyalty to Lagorn afterward being the type to side with whoever is in charge. He was killed when he tried to perform an assault on Turbo Builder via fighter jets.

A cheat who does anything to win; weak willed, and always sucking up to superiors.

His weapons are the Zul Shot (ズルッポ, Zuruppo) slingshot and the Zul Snapper (ズルパッチン, Zurupacchin) horagai which doubles as blowgun and can be used also to enlarge his monsters. 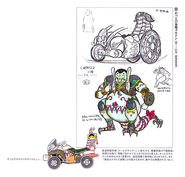