The Q-Rex Drill is the zord of Orion. It can transform into three forms, the Q-Rex Drill, the Q-Rex, and the Q-Rex Megazord. It is based on the Quantasaurus Rex zord piloted by Eric Myers in Power Rangers Time Force. Q-Rex's cockpit is the standard Super Megaforce console, but altered to accommodate Super Megaforce Silver's anchor motif along with two steering wheels for each corresponding arm.

The Q-Rex Drill originally belonged to Eric Myers, the Quantum Ranger. Time Force had heavily modified it and kept it in safe keeping until it is called to the past.

By placing the Mighty Morphin' Green Ranger Key in the center key hole, the Q-Rex Drill transforms into it's Dino Mode. With it, it can fire its Q-Rex Laser from its mouth and use its tail drill to bore into enemies. 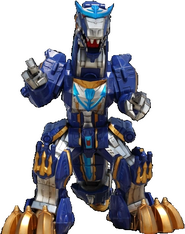 The Q-Rex Megazord is the Q-Rex Drill's last and final self-transformation. By placing the Dino Thunder White Ranger key in the center key hole, the Dinozord transforms into the Megazord Mode with the drill becoming its right arm. The drill has the most versatility in this mode as it has three modes: the standard Drill Mode, Trident Mode where the drill spreads apart to form a trident and use its Trident Fist attack, and Shield Mode where it spreads apart into a rotating propeller to block attacks. It's left arm can be covered by the dinosaur head and increase its punching power. By placing the Mighty Morphin' Green Ranger Key, the Quantum Ranger Key, and the Dino Thunder White Ranger Key into each respective Key Hole, the Megazord can perform it's Final Strike, the Triple Drill Attack, spawning its previous two forms and combining drills into one massive drill attack.

Retrieved from "https://powerrangers.fandom.com/wiki/Q-Rex_Drill?oldid=359932"
Community content is available under CC-BY-SA unless otherwise noted.