He liked basketball and takes on the form of a tall athlete. He serviced as executioner for Gorma sacrifices. His attacks were characterized by sending flying at his target seemingly hundreds of gourds carved with smiling, human faces. Once these things secured someone's head, basically the body was under total control. Killed by the Dairangers before he had a chance to grow giant. He was later brought back by Duke of Cards and fought Shoji once more and then grew giant along side Baron String,Key Jester,Lipstick Songstress and Duke of Cards who formed the Great King Ojaru 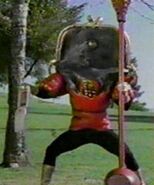 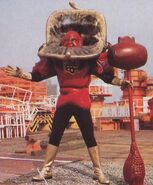 Retrieved from "https://powerrangers.fandom.com/wiki/Purse_Priest?oldid=976464"
Community content is available under CC-BY-SA unless otherwise noted.