"Anybody want to go a few rounds? I hear you been practicing kid. What do you say, you want to spar?"
―Punch-A-Bunch's first lines after Sprocket introduce him to the Green Ranger.[src]

"Now I'm a REAL heavyweight."
―Punch-A-Bunch after being enlarge by Orbus.[src]

Challenges
King for a Day
Flashes of Darkonda
Countdown to Destruction

Punch-A-Bunch is a robot boxing monster who turned Adam into a trophy, he serves as the main villain of the episode "Challenges".

Punch-A-Bunch is later seen as an audience member in Prince Gasket's Machine Arena. King for a Day

unch-A-Bunch is later seen on Onyx during Andro's visit. He tries to stop the Red Rangers, but is pushed out when Andros passes close to him..Flashes of Darkonda

Punch-A-Bunch was seen in Rita Repulsa and Lord Zedd's army.Countdown to Destruction

Punch-A-Bunch acts very much like a boxer, always wanting to chalange someone into a boxing match. 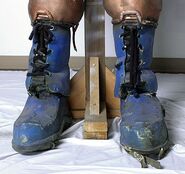 Retrieved from "https://powerrangers.fandom.com/wiki/Punch-A-Bunch?oldid=757651"
Community content is available under CC-BY-SA unless otherwise noted.