"What a busybody. Are you ready for divine punishment? (.....)"
―Prophet Strauss's first words

"The world will end in the year 2001!"
―Prophet Strauss's final words before being captured

A telekinetic who was arrested for making money on the followers he amassed with his prophecy that the Earth would come to an end in 3001. Released by Don Dolnero, and creating the figurehead Hakou, Strauss set up another doomsday cult with a prediction set for 2001. Tatsuya and Yuri investigated, exposing Strauss' scheme, as TimeFire arrived. Once the team gathered, TimeRed and TimePink double teamed Strauss, forcing him to enlarge with Shadow Beta and V-Rex facing him. In the end, Shadow Beta brought Strauss in as his followers disbanded. However, both of Strauss prophecies would later be revealed to have had some truth to them. 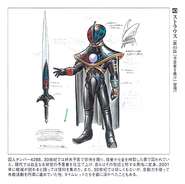