RangerWiki
Register
Don't have an account?
Sign In
Advertisement
in: Super Megaforce, Video games, Video Games by Bandai,
and 2 more

Power Rangers Key Scanner was an iOS app dedicated to scanning collectible devices in toy form. It reads Legendary Ranger Keys from the Super Megaforce toyline. Once downloaded, it is labeled "Key Scanner".

Originally, the full functionality of the Power Rangers Card Scanner was integrated into the app as well, with the ability to read Power Cards from the Power Rangers Action Card Game. The homescreen functioned as an extended desktop. Click or swipe left to access the old Card Scanner functions on "Power Card Mode". Click or swipe right to access the new Key Scanner functions on "Ranger Key Mode". The Card function was removed for a more stable release. Trivia 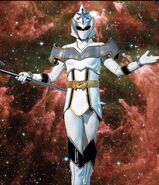 The new app allows one to read the unique codes on the bow of each Legendary Ranger Key toy, with the unlockables all already fully integrated into the app, requiring no internet connection. This then initiates a series of actions that could be performed using the Ranger that registered via the key (i.e. Red Samurai Ranger key unlocks Red Samurai Ranger etc.)

The "Morph" tab allows you to save one photo of the person to 'morph' using the front camera of the device. This image is saved for all subsequent actions until the "Morph" tab is tapped again for a new image.

The "Scan Ranger Key" function allows the player to scan the code of each key by aligning it with the image shown from the back camera. Once the key is 'scanned', a message will say "morphing". A (generic) Super Megaforce Red Key is shown turning on the Legendary Morpher and the previously-saved image in 'Morph' will load transforming the person in the image into whoever's key was scanned. Gosei will be heard speaking the team name and ranger color, and then the full photo of the Ranger will be shown. A battle with Xandred, Vrak or Prince Vekar will ensue as a third-person shooter or slasher. If the player wins, he or she can unlock the Ranger's team's special Team Cannon/Blaster/Weapon to fully vanquish the villain. The player will then have the option to save his or her image with half the helmet showing on his or her face as a prize.

With each new Legendary Ranger Key scanned, the "Key Collection" expands. The Collection updates chronologically by team, and within each team, it lists red first, blue second, green/black third, yellow fourth, pink fifth, "Sixth" rangers sixth generally. It allows the player to reuse Rangers previously scanned without having to rescan, after which battles can proceed again.