The Power Coins are supernatural golden coins forged by the sage Ninjor which were used as the power source of the Original, Ninja and Alien Rangers. When Zordon and Alpha 5 created the White Tiger Power Coin, it took a great deal of planning, power and delicate precision in order to accomplish the task. In 2020 it was revealed that the Morphing Grid is capable of creating Power Coins as well, however it requires a power source such as Morph-X. Where as Ninjor can create them at will while connecting them to the Morphing Grid with very little effort.

Sometime in the past, the Morphin Masters had created supernatural objects tethered to the Morphin Grid, later writing books that would eventually be kept within the Temple of Power. From these books, Ninjor learned about the Grid and created the Power Coins.

The original Power Coins drew their power from dinosaurs and other prehistoric animals and had an animal engraved on each one: Black Mastodon, Pink Pterodactyl, Blue Triceratops, Yellow Saber-Toothed Tiger, and Red Tyrannosaurus. The sixth Coin was based off a Green Dragon, but instead had a symbol resembling a three-toed dragon's footprint. Zordon gained possession of the first five coins after he and Alpha 4 found a map that lead them to the location of the Coins in the Desert of Despair. Unfortunately, Rita Repulsa somehow gained the sixth Coin on her own while battling the Desert's guardian, Rooten-Toomen, with the help of one of her warriors, Knasty Knight.

When Tommy Oliver's Green Ranger powers were permanently drained by Lord Zedd's Green Crystal and Turbanshell monster, Zordon and Alpha secretly created the White Ranger, using the White Tiger Coin as their power source. The coin itself was created within the Power Chamber beneath the Command Center, which at the time was unknown to the Rangers. Zordon created this Coin using the Light of Goodness. It appears that creating even one Power Coin is extremely dangerous as it took weeks of planning and design as well as shutting down the entire Command Center in order for the White Tiger Coin to be created.

Later in the Power Rangers' battles, Rito Revolto, the brother of Rita, appeared in the Moon Palace. Leading a new army of monsters, he successfully overloaded the Thunderzords' power storage, shorting out several Command Center functions, destroying the Zords themselves and damaging the Rangers' Power Coins and their connections to the Morphing Grid. The damage caused all the Rangers' Power Coins and Morphers to crack physically and destroyed their connection to the Morphing Grid.

Three years later in 1998, Adam Park returned, attempting to help his successor, Carlos Vallerte, overcome a confidence issue after a botched mission. When Carlos decided to hang up his Morpher, Adam pulled his own damaged Morpher out. Despite Alpha 6's attempts to stop him, he successfully morphed into the Black Mastodon Ranger once more. However, due to the damage the coin sustained during the fight with Rito, the unstable connection to the Morphing Grid caused Adam to phase in and out of his morphed state, causing him excruciating pain, and nearly killing him.

All the Coins would again be utilized during the finale of Power Rangers Super Megaforce where the original six Mighty Morphin Rangers took part in the final battle against the Armada. It is not explained how the pink, blue, and yellow Coins are restored. It was revealed in Dimensions in Danger that Tommy has access to the Master Morpher which allows him to morph in any previous Ranger powers he had. Rocky also participated in the battle as the Mighty Morphin Red Ranger, meaning that his Tyrannosaurus Power Coin was also restored since his Ape Ninja Coin was destroyed before the battle with Lord Draven.

In 2020 the Morphin Grid transformed an extremely powerful meteor into the original Tyrannosaurus Power Coin, and summoned its original wielder Jason Lee Scott. Jason then used the coin to morph into the Mighty Morphin Red Ranger to battle Goldar Maximus, but he also used it beforehand to summon the original Mighty Morphin Power Rangers as well as the Dino Thunder Rangers.

Whenever one Ranger was in great peril, and the others would need to assist them, the other Rangers could put their hands together and form a Power Crystal out of their morphing essence (their Coin). With it, they could transport themselves to wherever their Crystals were if a Ranger activated them. The Crystals could be transported through the Morphing Grid to a Ranger's Power Weapon, as first seen in A Pressing Engagement. When Jason had his (Red) along with the other four, he could activate them, transporting his friends, Zack Taylor (Black), Billy Cranston (Blue), Trini Kwan (Yellow) and Kimberly Ann Hart (Pink) to his location. The Rangers become beams of colored light upon transport. They could also be used in conjunction with the Dinozords, by becoming joysticks to control the Megazord, projecting energy lightning bolts from all 5 Zords at once in the Megazord's Tank Mode, or as one concentrated blast through the cranial laser in Battle Mode. Tommy's Dragon Power coin could be used to form a green Power Crystal as well. Although it was never seen being created, Jason used Tommy's Power Crystal to control Dragonzord in battle mode within its cockpit in place of his own. When summoning and jumping into the Tigerzord, Tommy was seen holding a small crystal sphere, presumably this was the White Ranger’s version of a Power Crystal.

The Megazord using the Power Crystals to fire energy blasts. 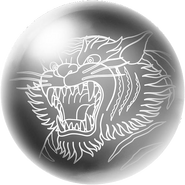 With the loss of their powers, Zordon sends the Rangers to find the maker of all the Power Coins, the mysterious Ninjor. After proving themselves, Ninjor created six new Coins which drew on the power of six animal spirits that represented each Ranger (the Red Ape, the Pink Crane, the Blue Wolf, the Yellow Bear, the Black Frog, and the White Falcon). With their new Coins and powers, the Rangers received the true power of the Ninja along with new Ninjazords. Despite this complete change in Power Coins, they retained their dinosaur and white tiger motifs on their suits, suggesting that the new Ninja Power Coins simply restored the Rangers connection to the Morphing Grid through a new link and activation "Call" while enhancing them with the ninja powers.

When Master Vile used the Orb of Doom to reverse time on Earth, the Rangers become powerless kids; the reason they could no longer morph was because at the age they had been reverted to, they had not received their powers. Though as a bright side, the Ninja Coins allowed the Rangers to maintain their true memories. With help from Billy, Cestro created a regenerator using the Ninja Coins as a power source. However, only Billy returned to his true age before the device was destroyed by Rito and Goldar. Goldar and Rito teleported into town and chased after the kids. They managed to steal their Coins and bring them to Zedd and Rita. With the two firing blasts from their staffs, the Ninja Coins were destroyed and reduced to dust in Goldar's hands.

Several years later following the creation of the Master Morpher. Tommy's White Falcon Ninja Coin was recreated within the White Tiger Power Coin and placed within the Morpher before the battle with Lord Draven.

There is now nothing left of the Power Coins but dust.

Ryu and Chun-Li from the Street Fighter franchise were pulled into the Power Rangers universe by Rita Repulsa and M. Bison. Tommy Oliver gave Ryu the Crimson Hawk Power Coin and a Power Morpher to fight as a Ranger, becoming Ryu Ranger. Gia Moran gave Chun-Li the Blazing Phoenix Power Coin and a Morpher to become the Chun-Li Ranger

In the 2016 Annual story 'Unlockly Heroes', when the Rangers are captured, Zordon produces two backup Power Coins based on the Entelodont and Terror-Bird and temporarily grants them to Bulk and Skull respectively.

Throughout the 'Shattered Grid' storyline, an evil alternate reality version Tommy, calling himself Lord Drakkon, uses a Power Coin with the combined powers of the Dragonzord and Tigerzord Power Coins. 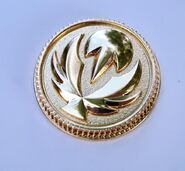 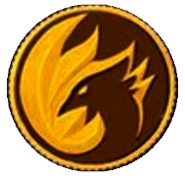 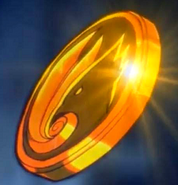 The Blazing Phoenix Power Coin being thrown to Chun-Li 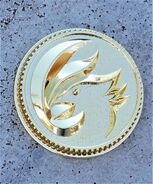 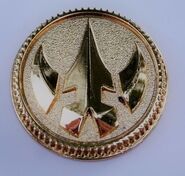 Heroes of the Grid tabletop RPG

In a Christmas expansion pack of the board game, Santa Claus can access a Ranger-like form using a Power Morpher decorated with holly leaves equipped with a Reindeer Power Coin.