"It's best to leave office while there is hope -de aru. I resign."
―Babatcheed's final words before his death.[src]

Like all other Ministers and Presidents of the Gaiark, Babatcheed has a signature phrase he says at the end of almost every sentence, adding "de aru" to his sentences. 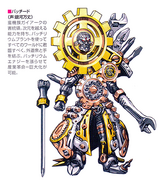