During the initial attack of the Black Cross Army against the Japanese EAGLE bases, Poison Gas Mask attacked the Kansai branch, killing everyone with Kenji Asuka the only survivor of the attack.

Poison Gas Mask's scheme is to use an underground gas factory to create his poison gas for hurting people. Tsuyoshi and Kenji discover the factory but the Masked Monster avoid their attack outside one slight hit from Akarenger's Red Bute that hits his helmet, using that as an excuse to further develop his "immortality". Kenji becomes obsessed in defeating Poison Gas Mask, who further riles him up by attacking the spies and then sneaking into Snack Gon to investigate. Midorenger challenges him and loses due to his immortality ability, torturing him until he forces the other Gorengers to save him. In a final showdown, Kenji discovers the trick to Poison Gas Mask's ability, flipping nibly until he finally hits him from behind with a Midomerang. Disoriented, Poison Gas Mask is easily dispatched by a Gorenger Storm.

Poison Gas Mask wears an old-fashioned European military uniform, consisting of a red tunic with gold decor on the cuffs and chest, a wide white leather belt, white jodhpurs, black leather cavalry boots, and a helmet with a bird statuette on top. He wears a modern-looking gas mask. 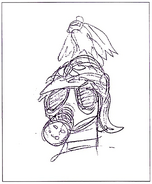 Retrieved from "https://powerrangers.fandom.com/wiki/Poison_Gas_Mask?oldid=1018881"
Community content is available under CC-BY-SA unless otherwise noted.