A monster who created and sold special "Diet Crêpes", while disguised as a chef, that actually induced people to eat anything nearby as part of Shibolena's scheme to throw the world into chaos with the lack of food supply, unless if they don't eat anything for 20 minutes, otherwise the effect wears off. MegaSilver, being a chef himself, was able to correctly suspect and later exposed him. While he was a formidable monster despite being quite comical, Pig Nezire's weakness was hunger (much to Shibolena's dismay). He would temporarily halt his mission or abandon a fight, even if he was winning, to look for food if he became hungry. After Miku, who was one of his victim managed to shake off the effects of the Crêpes, was able to defeat him with the Battle Riser, after Yuusaku cooked up a meal to distract Pig Nezire. Killed by Super Galaxy Mega. 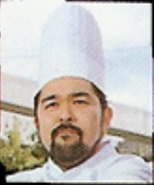 Retrieved from "https://powerrangers.fandom.com/wiki/Pig_Nezire?oldid=927031"
Community content is available under CC-BY-SA unless otherwise noted.