Stage 1: The Morning of Departure

Despite being a vampire, she is not adversely affected by sunlight and thus, is virtually unkillable. However, though she was immortal, her existence was a lonely one and overtime developed an ability to split herself up into the Nightmare Sisters (see below) as a remedy for it. As a result of her "special body", Vancuria was not constrained by the seal that kept the rest of Infershia underground and this served as an overseer of her masters' plans. She had a bit of a crush on both Victory General Branken (until he tried to kill her for her failure) and Sorcery Priest Meemy (though she couldn't stand him at first). Vancuria also had some admiration for Dark Magic Knight Wolzard as he helps her sometimes. She had her own Hades Beasts as pets including the Hades Beasts Mimic and Leech and was also friends of several of the Hades Beastmen like Garim and even had a romantic relationship with Belbireji although it didn't end very well for them.

With the help of Hades Beast Leech, Vancuria had the vampirized Houka Ozu under her control until Tsubasa Ozu and the other Magirangers broke the spell on their sister and finally ended Vancuria's winning streak over them. The Rangers managed to destroy Vancuria with Tsubasa's Dawn Crystal and the Magi Cross attack which crucified and blew her up, but that same night she reconstituted herself and destroyed the Dawn Crystal. When Tsubasa tried to destroy her again with the Dawn Crystal, it failed since the same tactic couldn't be used twice.

She awakened the Hades Gods when she discovered their lair by accident. She is like a hummingbird in size when compared to the Gods who were naturally giant. She was kept alive by the Hades Gods so that she could serve them as a spy. She developed a little bit of a crush on Hades God Wyvern, since out of the Hades Gods, he treated her the nicest until he was injured by Wolzard and suddenly started to act bitter, even towards her. She spied on Hades God Drake when he went to the surface world to fight Hikaru, because of Hades Goddess Gorgon's suggestion. She was hardly used by them until Hades God Dagon had her place one of his fish scales on Wolzard so the Hades Gods could track him. She carries another one of his scales to communicate on-site with Dagon. She also watched Wyvern fight the Magirangers before Wolzard Fire came to the rescue. Vancuria also traveled with Dagon and Hades God Sleipnir to see Hades Goddess Sphinx and began to have second thoughts about N Ma. Vancuria resurrected Sphinx and apologized to Dagon for this treasonous action, and was stunned when she killed Dagon. In the end, she joined Sphinx in the "new Infershia". Later, Vancuria gained another WolzaPhone for communication uses.

Years later, she was revealed to have been imprisoned by the Zangyack along with other reformed villains. The Gokaigers free her and the other inmates on their way to rescuing Gavan, though not before she harassed Joe for his good looks.

Nai & Mea (ナイとメア, Nai to Mea, played respectively by Chiaki Horan and Tomomi Kitagami) are the split form of Vancuria. Vancuria felt lonely and thus she split herself so she will not get bored. They are mischievous vampire-like girls dressed in Gothic Lolita attire. Many have come to the conclusion that Nai (the former, sometimes romanized as "Nigh" to keep up with their namesake) and Mea (the latter, sometimes romanized as "Mare" to keep up with their namesake) show Vancuria's cheeky and mischievous side. They usually cause trouble for the Magirangers at any chance they get. They can shoot bolts of energy from their mouths. Nai seems to be the "older sister" (or at least hold the major part of Vancuria's thinking patterns), since Mea tends to only repeat a portion of what Nai has just said, or even more rarely complete sentences started by Nai. In order for the two girls merge back into their true form, they hold hands and touch cheeks (before which they usually say "yacchaou ka?" ("shall we do it?") at the same time). When Wolzard briefly powered them up, Nai gained a stone dark crossbow while Mea used an enormous seven barreled cannon. Both of these weapons can be used by Vancuria once her components merge. Whenever a new spell was introduced on the side of the Infershia, instead of Mandora Boy explaining the spell's abilities, the sisters explain. The Nightmare Sisters were the ones that discovered Raigel and brought him back to their lair to be revived as their new commander, Meemy. The Nightmare Sisters gain another power boost again for a time in the form of the WolzaPhones, enabling them to use magic like Meemy and Wolzard, but the phones were eventually reabsorbed by Wolzard.

They also discovered the Valley of the Gods with the Book of Prophecy. When the Hades Gods were awakened, the Nightmare Sisters are not used as much like with their previous superiors except as guinea pigs in Hades God Toad's "body switch" curse because they turned him down. The duo were given purpose when Dagon had them put a tracking scale on Wolzard. The Nightmare Sisters also witnessed Sphinx's death at the hands of Dagon, and were both incredibly shocked by this event with second thought about their association with the Infershia as it was. They showed off their healing abilities by restoring Blagel, Sungel, and Smoky the Magical Cat to life, saying it was their way to compensate for all the mean things they had done.

Vancuria was one of the prisoners in the Makuu Prison. She demanded to be let out, threatening to curse Joe Gibken if he didn't. But she then saw how handsome Joe was and began flirting with him while holding him against the bars of her cell. It can be assumed she escaped with the other prisoners when they were set loose and returned home to Infersha.

In the first episode of Hikonin Sentai Akibaranger, the monster of the week, Shibuya Seitaka Awadachi Sou Hidenaga Abura Mushi, disguised himself as two maids dressed as Nai and Mea, just as Vancuria split herself into the original Nai and Mea. They were confronted by the Akibarangers at a cafe. Die-hard Super Sentai fan Nobuo Akagi (AkibaRed), deduced that they were actually one monster from the way they talked. They soon revealed their true form as they combined into Shibuya Seitaka Awadachi Sou Hidenaga Abura Mushi.

Vancuria appears, along with Yaiba of Darkness and Long, as one of the villains summoned by ©Na to battle the Akibarangers after she steals their Inordinate Powers.

Vancuria is based on the classic portrayal of a vampire. 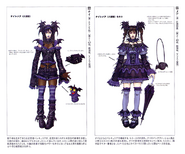