The Perseus System (ペルセウス座系, Peruseusu-za-kei)[1] is the star system which contains the planet Quetzalco, from which Vice Shogun Kukuruga heralds from. As one of the 88 Constellations, it is part of the space dominated by the Space Shogunate Jark Matter, with its power embodied by its very own legendary Kyutama.

Perseus was home to one of four sages among the warriors of the 88 constellation systems who fought with Hoshi Minato against Don Armage. Together, they devised a power to break the barrier protecting Jark Matter's capital planet Southern Cross in the Minami Juuji System. Space.37: Lucky, Seen Again With His Father To recreate that feat, the Kyurangers collected the respective Kyutamas of the four systems, Space.38: Flaming Spheres! The 9 Crisis Strike! with that of Perseus being found on the planet Ghem. Space.39: The Great Adventure of Perseus 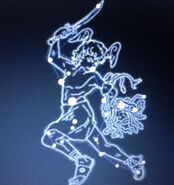 The Perseus Constellation
Add a photo to this gallery

Retrieved from "https://powerrangers.fandom.com/wiki/Perseus_System?oldid=865318"
Community content is available under CC-BY-SA unless otherwise noted.