Rise Of A Ranger (chronologically), The Ghostest With the Mostest (airdate wise)

The Pachy Zord is the personal Zord of the Graphite Ranger. It possesses the spirit of the Pachycephalosaurus that was given the graphite Energem 65 million years ago, just before Sledge's ship tractor beam was disabled when his ship was bombed and the meteors therein caused the dinosaur extinction. 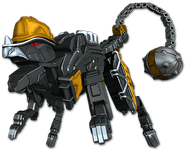 The Pachy Zord is only one of two Zords in Dino Charge to have its own personal finishing attack (the other being the T-Rex Zord). Its finisher consisted of dislodging its tail-ball from atop its head, swinging it around three times, and then flinging it forth. It would fly towards the enemy, smashing through a lot of concrete that was in front of it for some reason, and slam into the middle of the monster. The Zord would then about face and replace the tail on its head, the monster falling over and exploding behind it. This was performed only once, in the episode "Rise Of A Ranger " to destroy a Vivizord since the Rangers were too busy fighting G-BO and an army of Vivix .