The Orion System (オリオン座系, Orion-za-kei) is the star system home to an extra-terrestrial human race, from which the strongest warrior of the same name heralds from. Lucky's lineage also traces back to the Orion System as a distant descendant through Orion's wife and child in the Shishi System. As one of the 88 Constellations, it is part of the space dominated by the Space Shogunate Jark Matter, with its power embodied by its very own legendary Kyutama and Voyager wielded by the native Kyuranger warrior.

The Rebellion's spaceship Orion (Offensive Resistance Interstellar Orbiter of REBELLION) is named in honor of warrior Orion as well as modeled on the Orion constellation. Though it was ultimately destroyed, Space.32: Orion, Forever a succeeding Battle Orion Ship was constructed by Orion himself as the ultimate weapon against Jark Matter. Space.33: Launch! Battle Orion Ship

The Orion Kyutama (オリオンキュータマ, Orion Kyūtama, lit. Orion Nine Ball) is the Skill Kyutama which embodies the constellation Orion. It was originally lost in the past until Shishi Red met Orion's spirit, who transforms his abandoned club into his Kyutama namesake. It is used to pilot the Orion Voyager and the Orion Battler. Space.33: Launch! Battle Orion Ship 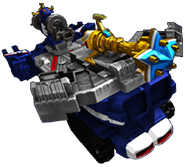 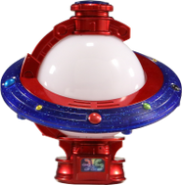 Shishi Red Orion
Add a photo to this gallery

Retrieved from "https://powerrangers.fandom.com/wiki/Orion_System?oldid=697415"
Community content is available under CC-BY-SA unless otherwise noted.