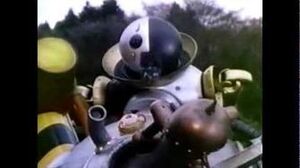 Orbus is one of the top two robots that serve the Royal House of Gadgetry, the other being his best friend Klank. Orbus is a cute looking mini module. They serve as the monster makers and enlargers of the Zeo arc, and are often kicked around by their masters. When King Mondo wanted his machine monsters to grow to megazord size, Orbus was upgraded to have a thread on him to allow Klank to swing him around and an enlarging laser in his mouth that, after being swung by Klank and landing on the machine/monster in question, Orbus used the laser to grow the monster. Orbus has a high-pitched voice. Both Klank and Orbus are presumably either purified or destroyed by Zordon's energy wave in Countdown to Destruction.

Retrieved from "https://powerrangers.fandom.com/wiki/Orbus?oldid=816765"
Community content is available under CC-BY-SA unless otherwise noted.