The Ooguma System (オオグマ座系, Ōguma-Za-Kei, Big Bear System)[1] is the evidently star system from which the late Rebellion Supreme Commander Big Bear heralds from. As one of the 88 Constellations, it is part of the space dominated by the Space Shogunate Jark Matter, with its power embodied by its very own legendary Kyutama and Voyager wielded by the Kyuranger warrior. 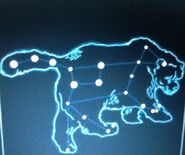 The Ooguma / Ursa Major
Add a photo to this gallery

The Ooguma Kyutama (オオグマキュータマ, Ōguma Kyūtama, lit. Big Bear Nine Ball) is the Kyutama which embodies the constellation Ursa Major. A Skill Kyutama, it housed the ghost of Supreme Commander Big Bear, who would use it to create that of its partner, the Koguma Kyutama, for the young Earthling Kotaro Sakuma to become Koguma Skyblue, granting him control of the combined Kuma Voyager. The Ooguma Kyutama itself allows Koguma to enlarge himself to a form he names Ooguma Skyblue. 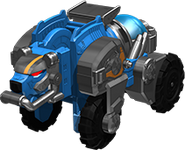 Ooguma Skyblue
Add a photo to this gallery

Retrieved from "https://powerrangers.fandom.com/wiki/Ooguma_System?oldid=864180"
Community content is available under CC-BY-SA unless otherwise noted.