For the morpher of the S.P.D. Omega Ranger see Omega Morpher.

The Omega Morpher is a morpher seen in the Boom! Studios comics utilized by the Omega Rangers. It is a specially designed morpher, with a far stronger direct connection to the Morphin Grid in order for its users to utilize it anywhere in the universe for special operations. This makes the Omega Morpher resistant to EM fields and other environmental factors that disrupt standard morphers in ways that prevent them from working entirely or distort their power connections in odd ways such as the planet Breel's "color swap" malfunction, where a Ranger's form and weapons are swapped but the respective source of power remains the same.

The Morpher resembles a glove that can be worn on either hand. the Morpher has gold plate that has the alchemy circle on the back. In the center of the circle were circular gemstones colored in each Ranger's color.

The Blue Omega Morpher was destroyed by Trini after she confronted Kiya after she went insane and wanted to kill all Power Rangers.

The user calls out "It's Morphin' Time!". The user then opens their hand and then says "Omega (fire/air/earth/water) Power!", slams their fist down, then is engulfed in colored flame-like energy which forms the suit, the Ranger's suit then crackles with surplus energy which then subsides, completing the transformation. 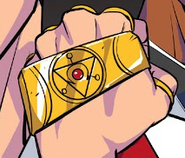 Black Omega Morpher
Add a photo to this gallery
Retrieved from "https://powerrangers.fandom.com/wiki/Omega_Morpher_(Boom!_Studios_comic)?oldid=967953"
Community content is available under CC-BY-SA unless otherwise noted.