"Hello! Caught ya."
―Oinogare's first words when he and a Nanashi kidnapped a random biker girl.[src]

"Oh! The oil! Hot hot hot!"
―Oinogare when Takeru sets him on fire using his oil and his final words before his initial defeat.[src]

His attack is the Sanzu Oily Hell (三途の油地獄, Sanzu no Abura Jigoku), which allows him to disarm his opponents with a torrent of slime.

However, the attack was used against him when Takeru uses his attack to ignite Oinogare's body in flames as Shinken Gold and Shinken Blue destroy him with their Waterfall 100 Drop attack. In the end, the revived Ayakasahi is frozen by Ika ShinkenOh using its Squid Freezing attack and destroyed with the Squid Flash.

According to folklore, the abura-sumashi (油すまし, abura-sumashi) is a yokai that carries a bottle of oil. It seems that Oinogare's oil is the basis of this legend. 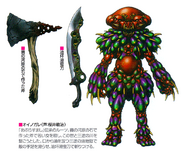