He teamed up with Togeno Aves so he could get revenge on the Patrangers for killing his brother. With his help, he poisoned Keiichiro Asaka and almost defeated the rest of the Patrangers, but was defeated. Returning in a giant size, he was finally killed by his own Lupin Collection. 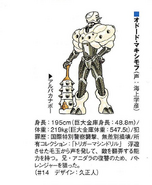