The S.P.D. Nova Ranger is Sam's comrade from the future.

During the final battle against the invading Troobian Forces, when Omega Ranger was having a difficult time, a Time Portal opened up and Nova emerged from it. Nova Ranger came from the year 2040, just like Omega Ranger. She worked together with Omega Ranger to help hold off the Krybot Army as their teammates fought Gruumm.

After the battle was won, Nova and Sam attended the B-Squad's promotion, and soon enough a Time Portal opened up once more, allowing Nova and Sam to return to the year 2040, where they now remain. 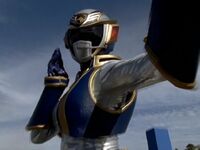