Nobuharu is 32 years old at the beginning of Kyoryuger. He is the oldest member among the six main Kyoryugers.

Nobuharu always used to cheer up Kenichi, the husband of his sister, during hard times. Kenichi was the only one who liked his jokes. After his death, Nobuharu took his old job and started taking care of his sister and niece.

TV STORY-Brave 8: Where Are We? Break Through the Labyrinth

The other Kyoryugers call him "Nossan" (ノッさん, "Nossan") due to his age. While on a trip, Nobuharu defeated Zyudenryu Stegotchi in an icy field, and gained its’ power. A powerful brawler who declares himself the “Armored Brave” (鎧の勇者, Yoroi no Yūsha). He lives with his widowed younger sister and niece.[1]

A Zorima was disguised as Kyoryu Blue by Debo Yakigonte as part of a plot to break the Kyoryugers up by questioning Ian's loyalty.

Nobuharu and his teammates are reacquainted with the Go-Busters and later fight alongside the Abarangers and Zyurangers against Space War God Voldos and his army.

Nobuharu and the other Kyoryugers were summoned by the SP Zyudenchi to help their descendants defeat Remorseful Knight Arslevan.

Kyoryu Blue appeared with his team among the first 38 Super Sentai whom collectively empowered Wild Tousai Shuriken King in its fight against the titanic Gillmarda, granting the Ninningers and Zyuohgers the power to perform the Zyuoh Ninnin Super Sentai Burst which destroyed Gillmarda with the combined power of all 40 Super Sentai.

Very clumsy, shy, and hilarious, Nobuharu is a hardworking Jack-of-All-Trades. Actually, he loves to try and act cool, but can never pull it off (like how he failed to spin his Gaburivolver). Despite his looks, he is a person with incredible strength, even in his civilian form.

Nobuharu always displays a bad habit to create old man jokes in every situation, even at an unsuitable time. However, while his jokes sound lame to most everyone, certain people however like his jokes. Among them are his brother-in-law Kenichi, Doctor Ulshade, Candelilla, Ryuji Iwasaki and Sela.

Nobuharu also grows envious of Utsusemimaru sometimes, because of him being three years younger than Nobuharu even after being time-displaced, And also because Utsusemimaru is able to create funnier old man jokes than him.

Armed On (アームドオン, Āmudo On) is Kyoryu Blue's extension form accessed by using two copies of the Stegotchi Zyudenchi in his Gaburivolver. Sporting spiky silver armor across his right arm, Armed On gives Kyoryu Blue to his Zyuden Arms weapon, the Stego Shield.

Kyoryu Blue is possessed by two revived Debo Monsters, Debo Tangosekku and Debo Tanabanta, in the DVD special Zyuden Sentai Kyoryuger: It's Here! Armed-On Midsummer Festival. The ghosts refer to this form as the “Cursed Brave” (呪の勇者, Noroi no Yūsha) and he wears a hitaikakushi. His suit collar also goes from white to black. 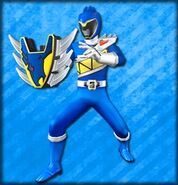 Kyoryu Blue appears with his team in the Nintendo 3DS Zyuden Sentai Kyoryuger: Game on Gaburincho.

Kyoryu Blue is among the vast pantheon of Rangers which are available in the mobile game Super Sentai Battle Base.

Kyoryu Blue appears with his team among all Sentai in the mobile game Super Sentai Legend Wars.