No. 1-kai! The World of Kikai is Kikikaikai!

No. 1-kai! The World of Kikai is Kikikaikai!

No. 1-kai! The World of Kikai is Kikikaikai! (キカイ世界はキキカイカイ！, Kikai Sekai wa Kikikaikai!) is the first episode of Kikai Sentai Zenkaiger. It features the debut of the Zyuohger and Ninninger Sentai Gears; Magine and Vroon make brief speaking appearances in this episode and Gaon makes a small non-speaking cameo.

It is accompanied by the first episode of Kikai Sentai Zenkaiger: Secret Zenkai File web series, Ep. 1: You too can Change Zenkai!.

Welcome to a world with an infinite number of parallel worlds. One day, such a myriad of complex and intricate worlds starts to fall into the clutches of an evil dynasty known as Tojitendo. The only world that remains is the one where our protagonist, Kaito Goshikida, lives. For some strange reason, the world where Kaito lives and the Kikai World where the Tojitendo are from have been merged together. However, it isn't long before the inhabitants of Kikaitopia, the Kikainoids, and the humans who live there, start to get along in harmony. It isn't long before the nefarious hands of Tojitendo reaches them. Their peaceful days are soon about to come to an end, just when one of these humans seeks to fight to defend the lives of both humans and Kikainoids alike. Kaito's first ally just so happens to be the cool-looking red old man that is Kikainoid Juran.

Through ‘’Super Sentai’’ history, previous teams from different worlds become trapped in mysterious black gear-like devices. In the present day, a young man overlooks the city of Tokyo from the Tokyo Skytree while being questioned by police officers. The young man explains to the police that he seeks to bungee jump from the top of the observation deck and is promptly removed from there. After being removed by the police, the young man tells them he wants do something big and be the first person in the world to do it. Suddenly, a purple gear-like shadow encompasses over the city and a race of mysterious android beings, along with a palace, fuse with the present-day earth. The young man realizes that they are beings from a parallel world that his parents mentioned. Excited by what he just witnessed, he approaches one of the beings and introduces himself as Kaito Goshikida.

A month later after merging with the parallel world known as Kikaitopia and its Kikainoid inhabitants, various Kikainoid citizens explain to the citizens of Tokyo that they never expected to be forced over to earth and be stuck there. Eventually, as some children and Kikainoid children enter the Sweets Café Colorful to buy some candy, an old woman watches a news report about how her daughter and her husband reported over 10 years that parallel worlds exist. Out of nowhere, Kaito comes into the store yelling for his grandmother, Yatsude Goshikida. Questioning why he’s yelling, Kaito explains to Yatsude that he needs cotton candy. Yatsude allows him to take some and Kaito runs off to the streets.

At a barbeque, while some adults are dancing to music, a red Kikainoid comes with groceries to give and asks to join the party. Joining the party, the red Kikainoid explains he doesn’t know what’s going on with the robot invaders.

Inside the enemy palace, the leader of the robot invaders, Great King Boccowaus, arrives and asks for a report from Mechanical Officer Ijirude. Ijirude explains to Boccowaus that they have captured all the parallel worlds in Tojiru Gears except for one world. Furious at what he’s hearing, Boccowaus explains to him that no progress has been made in over a month and subsequently abuses his him and his other general by pounding the platform they’re standing on with his hand, tossing them in the air. Boccowaus’ pet bird, Gege, tells that the last world took a portion of Kikaitopia. Ijirude doubts this and immediately electrocutes their janitor after he seeks an explanation about Kikaitopia being partially taken. After apologizing about the janitor’s outburst, Boccowaus demands that Ijirude searches for the cause as he is one step away from controlling all worlds. Gege interrupts and suggests to Boccowaus that he invade the world normally instead of trapping it in a Tojiru Gear as that would expand his territory. Listening to his suggestion, Boccowaus tasks Mobile Commander Barashitara to invade this world and he moves forward.

Meanwhile, Kaito awakens from a pile of garbage himself, coincidently next to the candy shop. Noticing the Kudakks pass by to attack his grandmother, he proceeds to push them back and then he and Yatsude barricade themselves inside the candy shop. Wondering what’s going on with the Kikainoids, Kaito grabs Secchan and recalls when his parents gave him his mechanical pet bird and how they told him to keep going until he gets his desired results. Recalling what his parents told him, Kaito decides to protect the world. Uncertain of how to do so, Kaito inadvertently awakens Secchan’s ability to speak and he forces him and Yatsude back to sit on a step.

Subsequently falling through the step with Secchan following them, Kaito and Yatsude awaken in a secret laboratory. Surprised to learn this was the place that Isao Goshikida and Mitsuko Goshikida did their research, Secchan explains that it was the place where they found more parallel worlds than just Kikaitopia and that many of the occupants in the parallel worlds had ‘’Super Sentai’’ heroes to protect the earth. Secchan raises the hidden Transformation Gun Geartlingers and the Sentai Gears and explains they were created using their research on Super Sentai. Kaito takes a Geartlinger and a Sentai Gear labeled with a “45,” and Secchan tells him to use them to fight off the Tojitendo. Kaito then takes another Geartlinger and Sentai Gear and tries to convince his grandmother to fight as well. Yatsude refuses to do so and tells Kaito to not force her to fight as she is 60-years-old.

Seeing them together, Barashitara comes and sees Kaito in one piece and declares that Juran will be scrapped as well. Juran then shoots a Kudakk and then is given his Sentai Gear labeled with a “16” by Kaito. After showing how the Sentai Gear and the Geartlinger work together, Kaito and Juran transform into Zenkaizer and Zenkai Juran, respectively, and declare themselves as ‘’Kikai Sentai Zenkaiger,’’ much to the enjoyment of Secchan and shock of Yatsude.

Zenkaizer and Zenkai Juran move forward to attack the Kudakks. Continuing to attack the Kudakks, Secchan communicates with them through their suits and tells them to use the various Sentai Gears stored in their Zenkai Buckles. Zenkaizer proceeds to take out the Zyuohger Sentai Gear, labeled with a “40,” and gains the ability of Zyuoh Eagle’s wings. Able to fly, Zenkaizer flies through and shoots the many of the Kudakks remaining. Flying by, Zenkaizer gives Zenkai Juran the Ninninger Sentai Gear and he proceeds to use it himself against the enemies. Gaining the ability to use the Ninninger’s finishing attack, Zenkai Juran and Zenkaizer finish off the remaining Kudakks.

Back at Sweets Café Colorful, Yatsude shows her appreciation to Kaito and Juran for saving everyone and all three decide to have a party to celebrate. Just as Yatsude goes outside, she screams, along with Kaito and Juran following her, at the sight of everyone in the city appearing to have mushrooms growing out of their heads and in the city. 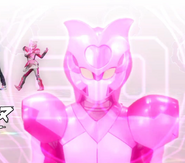 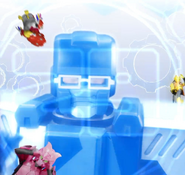