After the Mighty Morphin Power Rangers retrieved the Great Power from Phaedos they received new Zords containing the power of their Ninjetti animal spirits.

The Ninja FalconZord was the Zord of White Ranger Tommy Oliver and armed with missiles on the ends of its wings. Like the main show, It was the only Zord that could be independent of the Megazord; once docked onto the Megazord's back, forming wings, it completes the Ninja FalconMegazord. It could also be used in the place of a broken monorail track. Unlike its television counterpart, it possessed missile compartments in the front of its wings to fire a devastating forward barrage, capable of obliterating Scorpitron with one salvo.

The Ninja ApeZord was the personal Zord of Red Ranger Rocky DeSantos and was capable of human mobility and climbing. Its cockpit was on a circular area on the chest.

The Ninja FrogZord was the personal Zord of Black Ranger Adam Park. It had powerful legs as well as a long tongue that could be electrically-charged to shock opponents. The cockpit was trapezoidal and located between the eyes.

The Ninja WolfZord was the Zord of Blue Ranger Billy Cranston. It had strong jaws to grab opponents and strong legs. Its cockpit was an inverse trapezoid located between the eyes.

The Ninja BearZord was the Zord of Yellow Ranger Aisha Campbell. It could stand up on its hind legs to attack and maul enemies. Its rectangular cockpit was located on top of its head.

The Ninja CraneZord was the Zord of Pink Ranger Kimberly Hart. It could fly and had particularly powerful thrusters. Its cockpit was in the head itself.

As part of NYCC 2015, Bandai released an exclusive Power Rangers Dino Charge Mighty Morphin' Movie Charger set with each Dino Charger depicting four pictures. In the Ninja MegaFalconzord's case it featured the 6 Rangers, the White Ranger's Power Morpher, the Ninja MegaFalconzord and the MMPR: The Movie title. Although it's based on the movie version the Megazord depicted in the charger is based on the TV one.

Differences from the TV version 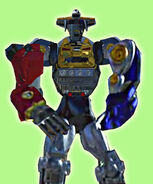