Nick was born in the Magic World, however, during the war, Nick was separated from his parents and raised in the Human World. Later, Nick would grow living with different relatives since his parents did not have time for him. When he went to Briarwood, the forces of evil were unleashed and he became the Red Mystic Ranger. Nick would become the leader of the Mystic Rangers and, together they fought against the forces of evil to protect the world.

Nick would later discover his origins and his eventual destiny as the "Light" that would save the world from the Darkness. Eventually, Nick and the other Mystic Rangers defeated the Master and saved the world. Nick left Briarwood with his biological parents to visit his adoptive parents.

Nick was born Bowen, son of Leanbow and Udonna. In the magical world, he was referred to as the "Light", born of a powerful warrior and sorceress, destined to defeat the Darkness. During the Great War, Bowen was fought over by Daggeron and Calindor. Luckily, Phineas brought him over to the Human World where he was raised by the Russells.

Twenty years later, his adoptive parents have been away for business trips and other important things, and has been riding on his motorcycle from relative to relative. Nick was adopted as a baby and never knew his birth parents, and he keeps the red blanket his baby self was originally wrapped in for sentimental reasons.

Nick arrived in Briarwood to live with his sister on the same day that evil was unleashed. Not long after, the little town was rocked by a thundering earthquake that announced the arrival of ancient demons. Nick was knocked from his motorcycle during the tremor, but was unharmed. His bike was less fortunate, and he had to stop to repair it. During the repairs, he witnessed an old man in distress, desperate for help. When nobody else would assist him, Nick stepped up, and volunteered to escort him into the Briarwood forest. His decency inspired the other four teens to join up and aid the old man.

Upon entering the forest, Nick and the teens lost sight of the old man, who soon revealed himself to actually be Udonna, the White Mystic Force Ranger. Udonna granted Nick a magic wand and the ability to manipulate fire. Nick was hesitant to accept the wand, and didn't believe anything Udonna said. It was at this point that Nick parted ways with the rest of the teens, and attempted to make his way out of the forest. Meanwhile, the other teens attempted to take on the invading Hidiacs, but were proving to be unsuccessful. Eventually, they were able to fully accept the power of magic and transform into the Mystic Rangers. Nick was the last to accept the power of magic, and came to join the team in the fight against Knight Wolf.

Nick works at the Rock Porium with the other Rangers and spends his spare time fixing his motorcycle. He was the first to befriend the troblin Phineas. However, Nick had a mysterious past he had not yet opened up to his friends about. Although Nick isn't the type to hold grudges, Koragg the Knight Wolf has repeatedly used magical telepathy to draw Nick into combat. Nick has found he can use the connection in reverse, contacting Koragg.

When he and the Rangers were battling Catastros and Koragg, he was pulled into another dimension with Catastros. In this dimension, his powers would not work as he was chased by Catastros, who was badly injured by Necrolai's crossbow arrows. Luckily, he managed to heal Catastros, and it was because of Nick's act of kindness that Catastros combined with him as Centaurus Phoenix Megazord. Nick managed to recombine with Catastros to stop Morticon from destroying the city.

Nick and the other Rangers were trapped in an alternate reality where the Mystic Rangers were never discovered caused by Jenji and Imperious. They went to the Tribunal of Magic to have things fixed back to the way it was, and they returned the world to its rightful state. Nick discovered that he was Udonna's lost son and the Light that the Ten Terrors were fighting for.

After Oculous had captured Xander, Vida, Madison and Chip, Nick was about to surrender. But Phineas finally was able to make Nick realize that with being The Light, he has the power to defeat the Darkness and save everyone. Nick then was able to join with Fire Heart to become the Red Dragon Fire Ranger, defeat Oculous, and save his friends.

By the end of Mystic Force, Nick was possessed by the Master and was transformed into a new Koragg. As such, the Master can summon the armor of Koragg around Nick, and has access to a variety of dark spells. After trapping the Rangers in a shield, Nick and his father duel in their respective armors. A massive battle ensues, destroying most of Rootcore. Leanbow finally reaches past the darkness to his son, and the Master is ejected from Nick's body.

Afterwards Nick was pushed to the limit, seeing Udonna captured, the world destroyed and his father briefly killed, but was convinced by Madison that he couldn't give up and that the Rangers needed him to keep fighting. He was able to wound the Master enough to force him to retreat and, in the last clash, led the Rangers in destroying him. With the forces of evil defeated and after giving Madison his blanket as a sign that he will return to Briarwood, Nick along with Udonna and Leanbow rode off into the sunset on motorcycles to see his adoptive parents.

Nick and the other Mystic Rangers returned as part of the army of Legendary Rangers that helped the Mega Rangers defeat the Armada once and for all, fighting in a huge battle against hundreds of X Borgs and dozens of Bruisers.

When Preston Tien read The Encyclopedia Of Magic & Spells is given to Preston Tien by Mick Kanic,The book contains a small bio on Chip Thorn and the others Mystic Rangers ,Nick was mentions by book as one of the magicians who defeated Octomus the Master.

He was shown along with the other Mystic Rangers when the villains were looking for a past villain to revive with the Reanimizer, and came across Koragg The Knight Wolf.

When events set into motion by Lord Drakkon caused the timeline to split into pocket universe, each anchored on a powerset, the Mystic Rangers were split off into their own pocket universe. Red Mystic Ranger eventually received Zordon's call through the Morphin Grid and was among numerous Rangers who rallied to his pocket dimension led by the Quantum Ranger for the last stand against Lord Drakkon, reunited in the Command Center.

to teleported in the moon of world of coinless for the fight against Drakkon against his Ranger Sentries,led by Jason Lee Scott.

During the battle in the moon of the world of coinless,the Mystic Rangers driving the Titan Megazord is seen regrouping with Jack and Kira ,however are attacked by evil Zord Serpentera, also is seen briefly in a Tommy Oliver's vision when an alternate Kimberly thrown a green chaos crystal thrown at him.

Nick's helmet is seen along with other Rangers helmets,in Jason's flashback and vision to the battle on the Moon of Shattered Grid.

Nick along with the other Mystic Rangers are among all the Ranger teams which appear in the Korean-developed mobile game Power Rangers Dash.

Nick is hot-headed, impulsive, arrogant and a wanderer who acts first and thinks later. However, there are times were he can be pessimistic, once believing there to be no chance against the Master when they were defeated by him in the final part of the two-part series finale episode "Mystic Fate". Nick considered giving up, but the other Rangers convinced him not to, given him courage to not give up. At first, Nick was a loner who would rather do things by himself than accepting help. However, with the other Mystic Rangers, he comes to accept the value of teamwork. Despite this however, Nick is also brave, headstrong and friendly.

As the Red Mystic Ranger, Nick wields the power of Fire. His weapon is the Magi.His weapon is the Magi Staff Sword/Striker , he also owns a Mystic Racer. His Titan form is the Mystic Phoenix, which makes up the bulk of the Titan Megazord formation. With his Legend powers, he can fuse with Chip, Vida, Xander and Madison to form the Manticore Megazord.

The Red Dragon Fire Ranger is the Battlized form of Nick Russell, the Red Mystic Ranger/Legend Warrior. In The Hunter, when Nick was facing Oculous to get his friends back, Fire Heart came to his aid, and the two merged together,this form is equiped by Samurai-like body armor and Retractable Wings Flight.

The Mystic Phoenix is the humanoid Mystic Titan form of the Red Ranger. Along with the Sprite, it fills the chest cavity of the Titan Megazord, forming a chestplate. Rides the dragon form. Looks like a Knight and usually wields a sword in battle.

Centaurus Phoenix Megazord is a combination of the Mystic Phoenix and Catastros. Its weapon is the fire staff made of Catastros' mane and head.

When Nick helped heal Catastros, and conquered his fear of the steed, he was rewarded by Catastros combining with the Mystic Phoenix to form the Centaurus Phoenix Megazord. However, after the battle was won, Catastros returned to Koragg.

This Megazord had tremendous fire powers and was able to defeat the Rock Troll.

This Megazord was formed only once more, after the Red Ranger and the Gatekeeper combined their energies to gain temporary control of Catastros. The Centaurus Phoenix Megazord proved to be essential in defeating Morticon.

Phoenix Unizord is a combination of the Mystic Phoenix and Brightstar. Together they form the Phoenix Unizord. This Megazord is similar in power to the Centaurus Phoenix Megazord, and their moves are similar.

This form is exclusive to MF Episode 23

Red Mystic Ranger transforms into a burning bird-like zord, which forms the wings of the Manticore Megazord

This form is exclusive to ystic Force Episode MF Episode 31 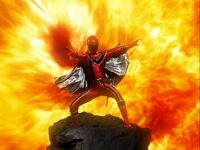 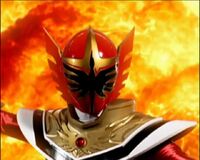 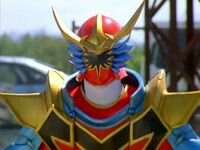 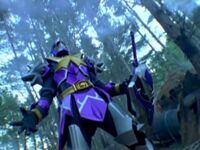 A female version of the Red Mystic Ranger as seen in Super Megaforce.