A genius mechanic at Pegasus Garage, Natsumi is able to fix any machine in minutes. She uses a legendary wrench given to her by her grandfather, who owned a garage, but later learns she can still fix anything without the wrench when she finds out that the wrench is a legendary wrench that can add adaptations to anything when used by an evil force. She also has the ability of dismantling things with uncanny speed and accuracy, as she once did to Naoki's bike when LL Onene had him under control by one of her headbands, by simply lying down on the ground and readying her tools as he cycled past her. Youko thinks of her as tomboyish in swimsuits. She tries to have a big sister-little brother relationship with Naoki, even though the idea does not quite appeal to him. Also, Natsumi fights with Kyousuke a lot because he doesn't take his leadership role seriously.

Yellow Racer is among the Sentai warriors seen in clips when Miku Imamura (MegaPink) lectured Sae Taiga (GaoWhite) about the past female Super Sentai warriors and their shared mastery of disguise and habit of changing their clothing in the blink of an eye, something that Sae had never done before.

Years later, Natsumi fought alongside not only her own team, but every single Sentai ranger in existence, against the Empire of Zangyack when it attacked the Earth in the Great Legend War. After fighting against hundreds of Gormin and their Zgormin commanders. Kaijou noticed the fleet moving towards them, he gathered all the Rangers together and gave them the order to sacrifice their powers to wipe out the first invasion's armada. The Yellow Racer powers are later utilized by Luka Millfy via the Ranger Keys.

After the Zangyack's final defeat, Marvelous returned the Ranger Keys to their original owners. It is assumed Natsumi and her teammates have their powers once again.

Natsumi, alongside her team (bar Signalman), among the majority of the Super Sentai heroes, was caught up in the "Super Hero Taisen" incident which eventually resulted in the Super Sentai teams and Kamen Riders joining forces to defeat both Dai-Zangyack and Dai-Shocker.

Yellow Racer appeared with her team among the first 38 Super Sentai whom collectively empowered Wild Tousai Shuriken King in its fight against the titanic Gillmarda, granting the Ninningers and Zyuohgers the power to perform the Zyuoh Ninnin Super Sentai Burst which destroyed Gillmarda with the combined power of all 40 Super Sentai.

Natsumi joined the Super Sentai Strongest Battle as a member of Vehicle Team, where she partnered with GoGreen and Bouken Silver and won a three-way match against OhYellow, ChangePegasus, and GoggleBlack of Legendary Team. His team was eliminated in the second round after losing against Oddball Team. 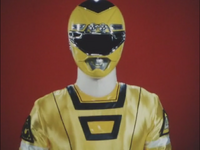 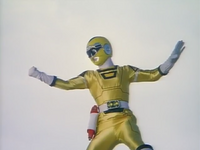 The Yellow Racer Ranger Key (イエローレーサーレンジャーキー, Iero Rēsā Renjā Kī) is Natsumi Shinohara's personal Ranger Key and what became of her powers after she along with the rest of the 34 Super Sentai sacrificed their powers to end the Great Legend War.

This key along with the majority of the Ranger Keys were collected by the Red Pirates and later used by the Gokaigers. The Yellow Racer Ranger Key was mainly used by Luka Millfy (Gokai Yellow), who used it to fight as Yellow Racer.

After Zangyack were finally defeated, the Gokaigers gave the Ranger Keys back to their rightful owners. Natsumi received her key and became Yellow Racer once more.

Natsumi as Yellow Racer appears with her team in the video game Gekisou Sentai Carranger: Zenkai! Racer Senshi. The RV Mechas have been dismantled and their parts scattered all around, so it is up to the Carrangers to collect all the parts required to rebuild them, all the while fighting the Bowzock gang. The parts appear in the form of cogs and gears, and can only be obtained by striking various objects and killing off Wumpers along the way, among other forms (finding and getting an engine, for example, will give off ten parts). Each Mecha requires 50 parts to be rebuilt.

Natsumi Shinohara/Yellow Racer: to be added

Yellow Racer is among the vast pantheon of Rangers which are available in the mobile game Super Sentai Battle Base.

Yellow Racer appears with his team among all Sentai in the mobile game Super Sentai Legend Wars.