"Master Ginis… The Earth is within view."
―Naria’s first words upon arriving on Earth in the Sagittari Ark.[src]

"This energy is full of Master Ginis' cells. Please do not waste it. Be Revitalized!"
―Naria's catchphrase when enlarging Players.[src]

Naria (ナリア, Naria) was the secretary of Ginis, his second in command, and the secondary antagonist of Doubutsu Sentai Zyuohger.

Entrusted with the Continue Medals by Ginis, having infused them with his own cells, Naria used them to revive and enlarge the defeated Players by inserting them into their unique Medal Slot. While the Team Leaders acted independently in their plans to send Players and create entertainment for Ginis in the Blood Game, Naria took direct orders from him for critical assignments. Presenting the Continue Medal before a fallen Player, Naria typically stated asked them not to waste the opportunity. Once grown, the Player usually replies "Thank you, Naria!" (サンキュー ナリア！, Sankyū Naria!), but in one occasion, Mantle replied "Gracias", Naria as "Gracias" means "thank you" in Spanish as he had a thick accent.

Naria presents the sight of Earth, which becomes the stage of the 100th Blood Game, to Ginis when the Sagittari Ark arrives in its view. Later, on Ginis' order, Naria provides a Continue to the Team Leader Jagged when he is defeated by the Zyuohgers.

Naria questions Ginis' sentiment that Earth was proving to be a suitable choice for the 100th Blood Game, citing the resistance of the Zyuohgers. The remaining Team Leaders, Azald and Quval, explain to her that the Blood Game needs the excitement of a challenging resistance in light of the easy destructions of their recent stages and prey.

When Ginis decides to try his hand in the Game, Naria is sent to introduce him and plant a device for the Zyuohgers to find to disarm a shrinking barrier. Said device is soon discovered to be the lethal Massacre Machine Gift, a robot Ginis hasn't used on other planets often because it makes the Game too one-sided in the Deathgalien's favor.

TV STORY-Ep. 10: The Most Dangerous Game

Naria introduces two new Players to Ginis; Hunterji and Dorobozu hailing from the team of the late Jagged and the only two remaining Players from said team. Later, once Dorobozu struggles to think of a way to effectively combat the Zyuohgers, Naria leads him to a backroom where she kicks some sense into him and points out that he should be using his invisibility powers. This ultimately falls through anyway and Dorobozu is killed.

Naria is sent to locate Zyumans, using the Player Mantle to create an Evil Ranger to combat the Zyuohgers. Her efforts catch the attention of the Zyuohgers, due to abducting people in animal costumes, unable to tell the difference between costumes and genuine Zyumans. Among her captives is Mario Mori, the uncle of Yamato Kazakiri. She scans each person to check to see if they are human or Zyuman, and once she is finished, she orders the humans to be killed due to them being worthless to her but they are rescued by the Zyuohgers. They free the humans, and defeat her Player, but Naria is able to obtain three Zyumans: a rhino, a crocodile, and a wolf; who are fused into a human named Misao Mondo, creating Zyuoh The World.

Finding that a number of Moeba Medals have gone missing, having been stolen by Domidoll, Naria reports this to Ginis who chooses to sit back and see the Space Circus ringmaster amuse him. Domidoll ultimately falls at the hands of the Zyuohgers.

Naria later appears at Ginis's orders when he launches an assault on the Zyuohgers, Bangray and Cube Whale. As he does so, Naria tags Cube Whale with a tracker before it goes berserk and they use it to locate Cube Whale's location when it fled. Ginis gives her a customized Gift Custom (an upgraded form of Massacre Machine Gift) for her to use to capture Cube Whale. She activates the giant robot and proceeds to pilot it, adding in a memory device before trying to obtain Cube Whale. The Zyuohgers fight, trying to prevent her from capturing it, but the customizations make Gift more powerful and it is able to damage their Mecha. After Cube Whale joins Zyuoh Whale, it is easily able to fight Gift and moments before the robot was destroyed, Ginis orders Naria to take the memory device, which she retrieves and retreates back to Sagittari Ark, where she gives Ginis the memory device for them to use against the Zyuohgers in the future.

Unable to bear the Zyuohgers' persistence, Naria hires the hero assassin Gillmarda to eliminate them behind Ginis' back. Originally, Gillmarda does indeed succeed in bringing about the mutual annihilation of the Zyuohgers and Ninningers as well as the extinction of Super Sentai itself, only to be defeated thanks to temporal intervention from Yoshiharu Igasaki. Along with Azald and Quval, Naria attempts to interfere with the Zyuohgers' fight only to be intercepted by the nine Kyurangers. Beaten back by Chameleon Green and Washi Pink, Naria is forced to retreat with Azald and Quval.

While Ginis is unconcerned about Quval's secretive actions, Naria does not share the same feelings and begins to investigate Quval's movements. She discovers he has replaced his hand with Bangray's hand, giving himself access to Bangray's mind reading and memory producing powers. She confronts Quval, and the two duel but Quval gains the upper hand and captures Naria and uses her memories to produce memory replicas of Players, Azald, and Ginis.

TV STORY-Ep. 41: The First and The Last Chance

After fighting Shin Ginis, Leo and Sela discover Naria, and they confirm that Ginis still lives. Leo decides to free Naria, unwilling to hurt a lady, and Naria attacks him and escapes back to Sagittari Ark where she rejoins her master. After Quval is defeated, Ginis orders Naria to give him a Continue and she inserts five Continue Medals into his slot, telling him he should be grateful of their master's mercy.

TV STORY-Ep. 42: The Future of this Planet

While Azald is playing darts, Naria asks him when he plans to start his next game with him brushing her off.

TV STORY-Ep. 43: The Witnesses of Christmas

When Azald feels disturbed after returning from his fight with Bud, Naria performs a scan on him and discovers foreign material matching the Zyuohgers' readings within his body.

TV STORY-Ep. 44: Monarch of the Humans

By Ginis' side, Naria oversees Azald as he embarks on his hunt against Bud on Earth but is greatly shocked to see Azald reveal his true form as Azald Legacy when his seal is broken in his fight against the seven Zyuohgers.

When Azald Legacy returns to the Sagittari Ark, she tries to stand between him and Ginis only to be knocked aside. When the Zyuohgers are on the verge of destroying Azald's core later on, she interrupts by tossing three Continue Medals into the core, enlarging him and causing him to lose his senses and run wild, claiming that no one leaves the Blood Game before taking her leave. After Azald is destroyed for good, she approaches Ginis, asking him if they should call the Blood Game a draw since both team leaders were gone only for him to say that he had a different idea.

Naria is sent down to Earth with a group of Mass Production Gifts to oversee its destruction. After the re-energized Zyuohgers form Dodeka King to attack the cord connecting the Sagittari Ark to the arrow stuck in the ground, she uses several Continue Medals on the Mass Production Gifts and then one on herself to enlarge the lot of them. After the army of Gifts are destroyed, she tries one last time to stop them, only to be struck down by Zyuoh Dynamite Stream.

However, Naria survives and later finds Ginis as the Zyuohgers as Yamato expose her leader's secret before she intervenes, admitting to have overheard yet intent to protect her leader. Unfortunately, Naria finds herself fatally wounded from behind by Ginis who tells his shocked aid that her compassion towards him is unacceptable. All she can do is bemoan how she has tried to help him before exploding.

As one of the four senior Deathgalien members, Naria is revived by former member Pocane Daniro but is soon defeated again by Zyuoh Tiger.

Naria was completely loyal to Master Ginis, functioning more along the lines of a secretary than a general, and holds him in such high regard that she will not allow anyone to so much as insult him. However, Ginis entrusts Naria with vital assignments. Her style of speech was very formal, even when she is fighting. She also showed a great deal of concern for Ginis's well being, being greatly relieved to hear he survived the attempt on his life by Quval but was also very perceptive, picking up on Quval's plotting.

Possibly due to her loyalty and affection for Ginis as well as her position, Naria could not fully comprehend Ginis' interests of manipulating the masses for entertainment,as she constantly mocked at any other individuals from Ginis' perspective and constantly warded off anyone who directly insulted Ginis,to the point she got surprised about Ginis' decisions regarding for having uses for those beings. Unfortunately, she began to develop feelings for him which led him to lose all respect for her and kill her himself.

Naria used only one Continue Medal to enlarge each one of the Deathgalien Players and Jagged, while she used five medals on Quval, three on Azald and half of a medal on herself. The only monster she did not enlarge with her own hands was Bangray who received the medal from Quval and ate it himself. 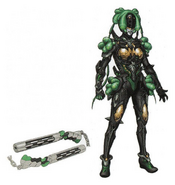