"Yo, Asami... Try changing it."
―Naoto's final words to Tatsuya before his death[src]

Naoto Takizawa (滝沢 直人, Takizawa Naoto) was the second TimeFire (タイムファイヤー, Taimu Faiyā), and the Sixth Ranger the Timerangers. He was the 22-year old rival of Tatsuya Asami, and the leader of the City Guardians established by the Asami Group.

Unlike Tatsuya Asami, Naoto came from the other side of the tracks, getting by on a scholarship as the two of them attended college. Naoto envied Tatsuya and wanted to be the better of the two. He eventually left college, because he was sick of snobby students. After he became TimeFire[1], the Asami group attempted to analyze the technology for mass production, but could not fully understand the 30th century Technology. Later he found out through Sion that the Londerz monsters are just prisoners and only need to be recaptured during the Bomb-Maker D.D. Ladis incident.

In Episode 37, he learned that the Timerangers came from the 30th century and, because of his desire for power, he chose to find a way to use his new knowledge of the Timerangers to his advantage. Near the finale, after Chairman Wataru Asami was hospitalized in a previous episode, Naoto was able to use that knowledge to gain full control of the City Guardians. Naoto also owned two pet birds, Tora and Sakura, which he later gives to a little girl.

In the finale, after Naoto was badly injured during the battle against NeoCrisis, he learned that Wataru Asami was able to regain control of the City Guardians through a legal maneuver. Naoto was kicked out of the City Guardians when they revealed that they were able to remove the Voice Lock function and therefore they no longer needed him which is how Wataru Asami was able to regain command. But just as three City Guardians were about to take the V-Commander away from him, Naoto fights them off and escapes his pursuers. While plotting to retrieve control from Wataru Asami, he sees a girl being chased by the Zenitts, so Naoto uses his gun to blast at the Zenitts, but was shot down mercilessly, and just as the Zennits were about to finish him off, Tatsuya came and helped Naoto escape. In the end, Naoto, on his last attempt to let the bird back into its cage, was shot in the chest by a Zenitt commanded by Ryuya, knocking him from the railing of a high-story emergency shelter all the way to the ground. Tatsuya runs in horror and arrives at the area of the shelter where Naoto ended up at just to find him gravely injured. Naoto then tells Tatsuya to change the way he lives and hands over the V-Commander to him just before dying from his injuries. Tatsuya then cradles his body and screams in despair.

TV STORY-Case File 49: Beyond the Millennium

TimeFire is among the Sentai warriors seen in clips when Yuusuke Amamiya (Red Falcon) lectured Gaku Washio (GaoYellow) about the past Sentai sword experts, showing him that the true sword wasn't the sharpest, but the one that feeds on courage.

Years later, TimeFire somehow returned and fought alongside not only his own team, but every single Sentai Ranger in existence, against the Empire of Zangyack when it attacked the Earth in the Great Legend War. After fighting against hundreds of Gormin and their Zgormin commanders. AkaRenger noticed the fleet moving towards them, he gathered all the Rangers together and gave them the order to sacrifice their powers to wipe out the first invasion's armada.

Naoto's spirit later appeared to Gai Ikari about his becoming Gokai Silver, along with Burai and Mikoto.

TV STORY-Ep. 18: The Big Abare with the Dinosaur Robot Drill

After the defeat of Ackdos Gill, Captain Marvelous returned all the Ranger Keys to the former Sentai heroes. Since Naoto could still transform in his deceased state, it is assumed its return was a symbolic measure as opposed to the actual return of his powers.

At the end of Hikonin Sentai Akibaranger: Season Two, Naoto, as TimeFire appears with two other deceased Super Sentai warriors, Yellow Four I and Abare Killer, before the deceased Akagi, Yumeria, and Luna at Himitsukichi. After the Akibarangers bid farewell to Hiroyo and Kozukozu, they disappear along with the three Sentai warrior ghosts.

TimeFire, Naoto appeared with his team among the first 38 Super Sentai whom collectively empowered Wild Tousai Shuriken King in its fight against the titanic Gillmarda, granting the Ninningers and Zyuohgers the power to perform the Zyuoh Ninnin Super Sentai Burst which destroyed Gillmarda with the combined power of all 40 Super Sentai. 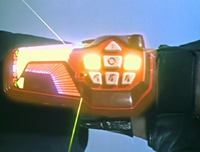 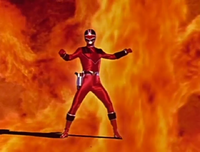 The TimeFire Ranger Key (タイムファイヤーレンジャーキー, Taimu Faiyā Renjā Kī) is Naoto Takizawa's personal Ranger Key and what became of his powers after he along with the rest of the 34 Super Sentai sacrificed their powers to end the Great Legend War.

This key, along with the other fourteen sixth ranger keys and the ten extra hero keys, were initially acquired by Basco ta Jolokia and later used by the Gokaigers. Like all of his Ranger Keys, Basco used his trumpet, the Rapparatta, to turn the TimeFire key into a puppet to do his bidding. The copy TimeFire was one of the first five sixth rangers that Basco showed Captain Marvelous (Gokai Red), revealing he had found more Ranger Keys. These five puppets fought the Gokaigers and were all defeated, with TimeFire being defeated by Gokai Red. Basco left these five keys to the Gokaiger.

A short while after, the first fourteen Sixth Ranger Keys, along with all the Ranger Keys of the first 33 Super Sentai, were briefly taken by the Black Cross King and turned into Ranger puppets that were fought by the Gokaigers and the Goseigers. The TimeFire key was among ten of these Sixth Ranger Keys who fought, and were defeated by, Gosei Knight.

While in the possession of the Gokaigers, the TimeFire Ranger Key was mainly used by Gai Ikari (Gokai Silver), who used it to fight as TimeFire. It was also used by Captain Marvelous (Gokai Red) on one occasion.

During Gai's encounter with the three sixth rangers, it was shown that somehow, presumably due to his deceased state, Naoto and all deceased rangers could still transform.

After Zangyack were finally defeated, the Gokaigers gave the Ranger Keys back to their rightful owners. It is presumed that Naoto received his key despite being in the afterlife.

Naoto Takizawa/TimeFire: to be added

TimeFire is among the vast pantheon of Rangers which are available in the mobile game Super Sentai Battle Base.

TimeFire appears with his team among all Sentai in the mobile game Super Sentai Legend Wars.