Ep. 21: The Birth of a Mythical Qi Beast

Mythical Chi Beast Won Tiger (気伝獣ウォンタイガー, Kidenjū Won Taigā, King Tiger) is the personal Chi Beast of KibaRanger, created in episode 22 by the combined powers of Kaku and the five core Dairangers. It can serve as a mount for RyuseiOh when the latter is in warrior mode and can attack with a blast of sound called Great Roar. Its suit actor was Jiro Okamoto.

Due to the detrimental effects of the Gorma Tribe's Yoryuku, the Great Cosmos deemed it necessary to create a sixth Mythical Chi Beast. To do so required the Dairangers to journey to a distant land where the Great Cosmos planned to birth it so they could use their power to bring it into being. Unfortunately, Shadam learned of the event and sought to prevent it by capturing and executing Ryo. With the help of Kou, the other Dairangers were able to rescue Ryo and make it to the location of Won Tiger's birth in time to bring it into being, whereupon Kou claimed him as his personal Chi Beast.

Like RyuseiOh, Won Tiger can assume a humanoid form called Mythical Chi Warrior Won Tiger (気伝武人 ウォンタイガー, Kiden Bujin Won Taigā), called "Warrior Mode" for short, with the command of "Warrior Change." In Warrior Mode, Won Tiger is armed with the Golden Sword (黄金剣, Ōgonken) formed from its tail and the 7 Legendary Chi Treasure Pearls in its cockpit which correlate to both the seven days of the week and the Chinese elements. These jewels, when used, make Won Tiger use powers themed after them;

The Golden Sword
Add a photo to this gallery

In Warrior mode, Ryuseioh can mount Won Tiger, using it as a steed to charge opponents and strike them with the Flying Dragon Rod.

Its attacks include Great Chi Power Punch (大気力パンチ, Dai Kiryoku Panchi) and the Flying Sword - Smash to Atoms (飛翔剣・木端微塵, Hishō Ken: Koppamijin) finisher, where Star-Houou is released from Kiba DaiOh's arm and then charged with a blast of energy from the tiger head on Kiba DaiOh's chest, allowing Star-Houou to smash through opponents like a missile after flying through a virtual grid. 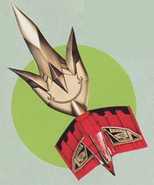 Star-Houou's Claw
Add a photo to this gallery

Retrieved from "https://powerrangers.fandom.com/wiki/Mythical_Chi_Beast_Won_Tiger?oldid=824389"
Community content is available under CC-BY-SA unless otherwise noted.