Mutitus was a powerful zombie-like monster summoned by Rita. He serve as the secondary antagonist of the episode "Island of Illusions" (the main antagonists being Rita and Lokar.)

Mutitus was a zombie like monster summoned by Rita to attack Angel Grove. He used bolts attached to chains similar to the ones that Rita's Frankenstein Monster used. It was a fierce opponent and, after summoning the evil deity, Lokar, Rita had him use his "Breath of Doom" to transform Mutitus into a more dragon/demon-like form. This new form lacked the ability to use a chain to attack due to it's shortened arms, but gained a much fiercer ability in place of the weapon it had lost, a small effigy of Lokar's head appears around the new Mutitus' neck which was capable of firing different projectile attacks.

Mutitus is a very violent monster who is highly fierce and destructive and will not stop to destroy the Rangers. He is however borderline mindless as he never speaks and his violence is almost unmatched. He is also shown to be loyal to Rita and Lokar. He also doesn't talk, only speaks in roars and growls. 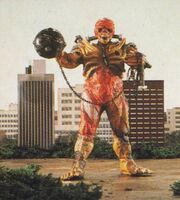 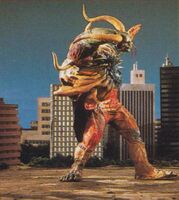