"Whoo-hoo! I love the feel of souped-up plugs!"
―Motorcycle Org as he's recharging up his strength.[src]

"You couldn't beat me when I was a scooter! How are you going to beat me now that I'm Turbo-Charged?"
―Motorcycle Org's final words to the Yellow Ranger before his destruction.[src]

Scooter Org and later Motorcycle Org is an Org that resembles both scooter and later a motorcycle and is one of the primary villains of the seven-part Zen-Aku story arc episode, he serves as the main villain of the episode "Revenge of Zen-Aku" the fourth episode in the Zen-Aku story arc.

Scooter Org was one of the ancient Orgs that tried to take over the Earth with Master Org 3,000 years ago, this Org tooked the form of a scooter and is the first Org that the Taylor, the Yellow Ranger fights (and chronologically, the first Org to be fought as a whole), she was out match because she couldn't handle it the first time she faced it, luckily with Princess Shayla's help, they were able to sealed the Org in a tomb.

A year later after the new Rangers: Cole, Alyssa, Danny and Max joined in the team, a Duke Org name Zen-Aku heard Scooter Org moaning out for revenge, he goes to an Org cemetery and frees the Org, he conferred both the Taylor and Princess Shayla in an upgraded form with a new motorcycle theme now called Motorcycle Org, she remembers him and took on the Org, but she was quickly out match, Princess Shayla tried to help, but she was caught by Zen-Aku, Taylor tried to save her, but she got blasted by Motorcycle Org, wounding her completely, Motorcycle Org was about to finish her off until Zen-Aku told the Org to finisher her later, because "Revenge isn't something to rush", he agrees and he along with Zen-Aku and the now captured Princess Shayla teleported away, at the work shop, he is recharging thanks to Zen-Aku, he later alerts Zen-Aku of the Rangers outside and (after Zen-Aku takes Princess Shayla outside as well) he conferds Taylor in the battle, the other four Rangers came in to help, but they were stop by Zen-Ake, even tho Motorcycle Org is now Turbo-Charge, he was no match for the Yellow Ranger (who was enrage by that has happen because of Motorcycle Org), she then use the Soaring Slash Attack to greatly wound the Org. He was then destroyed permanently by the Wild Force Ranger's Jungle Sword Savage Slash Attack. Revenge of Zen-Aku

As Scooter Org, he was loud, ruthless and will stop at nothing to defeat Taylor.

As Motorcycle Org, he retains his personality that he had before, but he is very loyal to Zen-Aku since he freed him. 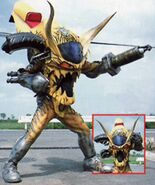 Scooter Org
Add a photo to this gallery

Retrieved from "https://powerrangers.fandom.com/wiki/Motorcycle_Org?oldid=963652"
Community content is available under CC-BY-SA unless otherwise noted.