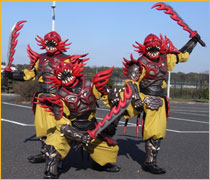 Moogers are the basic foot soldiers in Power Rangers: Samurai. They were all transported to the Netherworld after Master Xandred's death.

They come from the Netherworld and serve under Master Xandred. They carry swords used for basic combat, and are in control by a Nighlok. They also use bows and arrows for ranged combat. Its possible that Moogers have a mind, as in the Tengen Gate, they agreed with Arachnitor about forcing the Red Ranger to show them the sealing symbol. Moogers are typically in golden brown attire and equipped with swords or bows. Master Xandred is capable of creating Moogers of all types when he is enraged.

Twice in the show, there are purple colored Moogers that are are slightly stronger, typically using staffs as a weapon. Clash of the Red Rangers - The Movie The Rescue

Most of the destroyed Moogers end up in the Nighlok Heaven where some of them were working at the Halloween party there. Party Monsters

Giant Moogers have the same combat ability as their smaller counterparts, though their weapons can destroy buildings. They can use spears, something that looks like a flail, bow and arrow, staff and of course, a sword.

Flying Moogers use these staffs to fire projectiles at the Megazord, and were first seen when the Battlewing Megazord was created. Flying Moogers also use the staff to block off attacks too. They have wings on their backs, as well as dark brown trousers and helmets that resemble a bird's head.

Master Blasters are Moogers that have been trained by Maldan, at Serrator's command, to use specialized "Laser Blasters". Thus, they differ from regular Moogers who use swords and red Moogers who use spears by handling long-distance projectile weapons. The "Laser Blasters" are fashioned like royal shotguns and can be fired from a great distance. Master Blasters also are unique in that they wear Japanese soldiers' hats into battle. They are drilled soldiers, however they lack the hand-to-hand combat skills that their other counterparts have.

The Colossal Mooger Cannon Company are giant Moogers who carry a gigantic cannon intended for attacking Megazord combinations. If the cannon is dropped, they will scramble to pick up the cannon again.

Retrieved from "https://powerrangers.fandom.com/wiki/Moogers?oldid=841371"
Community content is available under CC-BY-SA unless otherwise noted.