Nurikabe and Mokumokuren (モクモクレン, Mokumokuren 1, 5, 6, 12 & 53) are wall Youkai brothers who capture humans and bet on them to see who can escape their maze first with the loser giving the winner his gold.

Mokumokuren aids his older brother to get revenge through Tsuruhime. Having fallen in love with Tsuruhime, Mokumokuren uses a necklace he and his brother bought under false pretenses to place the kunochi under his spell to trick her into a legal binding marriage. After a "fixed" Youkai marriage court and Nurikabe's death by the Shark Driver, Mokumokuren enlarges and is overpowered by White Kark before being destroyed by Muteki Shogun. Ep. 6: The Eyeball Prince!

A replica of Mokumokuren is created with a bladed right hand, fading once Tengu was killed. Ep. 12: They Came Foorth!! New Juushou

Mokumokuren reappeared, along with all the other defeated Youkai, within the Seal Door after their master Daimaou was finally contained there by the Kakurangers. Reeling that they were now powerless in captivity, the Youkai all vowed that they would one day be reborn and regain their power, cursing humanity. Final Ep.: Sealing!! 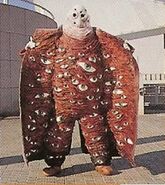 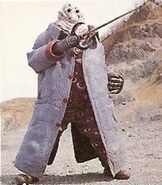 Mokumokuren replica
Add a photo to this gallery

Retrieved from "https://powerrangers.fandom.com/wiki/Mokumokuren_(Kakuranger)?oldid=886591"
Community content is available under CC-BY-SA unless otherwise noted.