Ryuji is reunited with his old high school classmate Kazuya who has become one of the Go-Busters' engineers, while Enter tries to infiltrate the Go-Busters' base of operations to steal a new Buster Machine's blueprints.

After piloting the GT-02 Gorilla to get in some target practice, Ryuji meets with the others as Kuroki reveals that Enter has been sighted at the Megazord Development Facility and is likely after the blueprints to a new Buster Machine. When the Go-Busters intercept Enter when he poses as a cop during an uproar he caused, he uses Buglers to cover him as he tries to reach the blast doors.

However, after failing to get through in time, Enter escapes as Ryuji meets his old high school friend Kazuya. Kazuya takes the Go-Busters to the blueprints of the new Buster Machine BC-04, with the group realizing that Enter may be after them to fortify the Vaglass forces. Ryuji reveals that he and Kazuya were both interested in MegaZords as high school students, but after the incident 13 years ago, Ryuji was forced to give up his dream. Soon after, the EMC staff are alerted to the creation of DrillRoid and contact the Go-Busters of a Vaglass MegaZord's arrival within three minutes.

Realizing that Enter has an inside man, Ryuji decides to stay behind as the others enter the Buster Machines to deal with the enemy Megazord. However, though seeming to be a no-show, Red Buster realizes their enemy is underground, and right when he did, the DrillZord opens fire at the Busters. By that time, and realizing Kazuya has been helping Enter, Ryuji confronts Kazuya when he finds him copying the blueprint data into a memory drive and is shocked to find how disillusioned his friend became just before DrillRoid arrives and downloads the data from the computer with Ryuji forced to destroy the computer, shocking Kazuya at the inhuman strength Ryuji has gotten.

However, DrillRoid notices the memory drive with Blue Buster holding the MetaRoid off as Kazuya runs off with the item. Sadly unfortunate having second thoughts as Blue Buster destroys DrillRoid, Enter still manage to stole Kazuya's memory drive and fail the mission. Coming to the others' aid in the GT-02 Gorilla, Blue Buster joins the others in forming Go-Buster Oh and forcing the DrillZord to the surface so they can destroy it. Later, Ryuji finds a regretful Kazuya and he forgives his old friend while telling him to continue working for both him and their mentors. 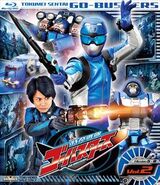 Go-Busters Volume 2, Blu-ray cover
Add a photo to this gallery

Retrieved from "https://powerrangers.fandom.com/wiki/Mission_8:_Protect_the_Machine_Blueprints!?oldid=887740"
Community content is available under CC-BY-SA unless otherwise noted.