The Go-Busters begin to lose hope as Enter's ability to become more powerful with recreation allows him to assume a Red Buster-like form called Dark Buster. As Hiromu steals his resolve into sacrificing himself for the good of his friends, Masato tries to prepare an alternative involving Hyper Space.

Explaining how more powerful he has now become from copying Hiromu's data through the final Messiah Card with each demise and recreation, Enter transforms into a parody of Red Buster: Dark Buster. Now beyond the primary Go-Busters' ability to destroy with Powered Custom mode with an understanding of the human spirit and confidence that will soon have the power to change the world in his image, Dark Buster proceeds to overpower the five before taking his leave while telling them that the best is yet to come. After the others scold him for being reckless in trying to handle the Messiah Card on his own. When Ryuji promises to kill Hiromu if needed and Yoko having faith they can save him, Hiromu thanks them as he entrusts them with his life. Eventually, the group learns that Enter merged into an Enetron tank to convert it into a cocoon. But once inside to find survivors, the primary Go-Busters find most of the humans being assimilated into the building's structure with only two children spared. Enter reveals his evolution is nearly complete as the primary Go-Busters take the kids when Buglers manifest. Once the Buglers are dealt with, the primary members are called that Masato reveals that they are going into subspace through Hangar 4 for a risky gambit that could remove the card from the Hiromu. However they are unaware that the process will likely also destroy Masato's physical body. Knowing the risk as subspace is unstable since Messiah's defeat in the dimension, the Go-Busters resolve to take Enter with them to finish things with him there. As Go-Buster Oh and Buster Hercules are formed, Enter has the cocoon transform into Megazord Omega as it proceeds to assimilate the surrounding thirteen Enetron tanks to begin his. Though, Enter is knocked in Hangar 4 as he realizes their proceeds to tear the Energy Management Center apart. But with Tategami Lioh joining the fray, the Go-Busters' Megazords hold Megazord Omega long enough for all five Megazords to be transported into the unstable subspace. While the Go-Busters are unconscious, Enter surveys the dying landscape with the intent to return to reality. 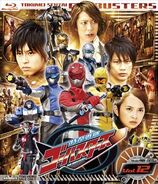 Retrieved from "https://powerrangers.fandom.com/wiki/Mission_49:_Preparation_and_Selection?oldid=1031883"
Community content is available under CC-BY-SA unless otherwise noted.