While celebrating the New Year, Hiromu discovers that his sister is going out on a date with someone, finding it to be Ryuji. As the events unfold, a presumed dead Vaglass member is about to enact his revenge.

Finding a strange group of Buglers in East district, the Go-Busters take all but two of the grunts as they found Escape's tablet and escape during the fight. With the threat apparently dealt with, as Hiromu sees Rika and learns that she has something important to do, Yoko finds Gorisaki taking Ryuji to see Rena Sato for a blind date. Guilt tripped into it, Ryuji lies of his profession to Rena with Yoko, Masato, and Jay watching incognito. But the spies find Hiromu also in the restaurant as he wanted to know what his sister is doing, all of them joining forces to ensure Ryuji and Rena have a good time as Hiromu tells Morishita not to contact Ryuji no matter what. By that time, at the South district, the Buglers accidentally create a Metaloid with a Vaglass Megazord to arrive in five minutes. The gang decide to take out the threat before Ryuji, who noticed them, to keep him in the dark. As Yoko is grabbed by Ryuji to be his moral support, Red Buster meets with Beet Buster and Stag Buster as they find themselves unknowingly trapped by the tiny Metaloid Omochiloid. When Yellow Buster arrives, knowing he cannot fight the Go-Busters at his present size, Omochiloid latches onto Hiromu as he runs into the restaurant to be Ryuji's wing man. Seeing a change to use the restaurant kitchen to enlarge himself, Omochiloid causes a racket to reach his destination while Buster Hercules deals with the Omochizord. As Tategami Lioh comes to provide back up in destroying the Omochizord with the Lioh Burst, Hiromu learns that he dealing with a small Metaloid like before. Joined by Yellow Buster, Red Buster finds Omochiloid in the kitchen as he uses a stove to enlarge himself to human size and overwhelm the two Go-Busters. When the two starting finding each other and realizing something is going on, Ryuji and Rika emerge from the restaurant after Red Buster assumed Powered Custom to destroy the immobilized Omochiloid. Later, as Hiromu and Nick learn that Rika was actually having a business meeting rather than a date, Ryuji is in the dumps by Rena when she has a boyfriend. With the stress this misadventure brought them, Hiromu decides to go to temple to wish for some peace. 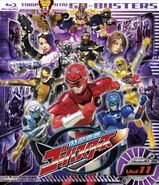 Go-Busters Volume 11, Blu-ray cover
Add a photo to this gallery

Retrieved from "https://powerrangers.fandom.com/wiki/Mission_45:_Happy_New_Year!_Another_Small_Formidable_Enemy?oldid=969508"
Community content is available under CC-BY-SA unless otherwise noted.