The Go-Busters infiltrate a hospital where Vaglass has taken hostages in their attempt to acquire Enetron.

After calming down Messiah to keep it from unknowingly destroying their transfer routes, Enter assumes the form of a doctor as he creates the Metaloid Needleloid. Alerted to the Enetron leak, arriving to the Kodokura district and finding something not right about the hospital, the Go-Busters infiltrate and find the medical staff being turned into robots before being forced to fight them. They find Enter, who explains that causing humans to suffer is part of his directive. Finding they have forty-one minutes until Vaglass Megazord arrival, Ryuji sees Hiromu provoking Yoko about her age before she uses his Weakpoint on him after her Weakpoint .

The three eventually find a doctor being chased by Buglers, assuming their Go-Buster forms to save him. The doctor reveals that Needleloid is using the Enetron to convert humans to the point of putting the patients in the ICU at risk. With thirty minutes left, overhearing Blue Buster's plan to restore the hospital's Enetron while the others deal with Needleloid, Enter increases Bugler numbers while putting the hospital on lock down. Managing to make it out, Blue Buster proceeds to reach the GT-02 and his BuddyRoid Gorisaki Banana while the others fight their way through the Buglers with Yellow Buster saving a little girl. Explaining to Hiromu that she is no longer the little girl who comforted years ago, he and Yoko reach an understanding with each other as they find Needleloid and knock the Metaloid out of the hospital before destroying him.

By that time, having the GT-02 assume Animal Mode to siphon Enetron from the tower for transport to the hospital, Blue Buster pilots his Buster Animal to evade the NeedleZord as it attempts to steal the Enetron from the GT-02 prior to CB-01 showing up. With the GT-02 Gorilla making its way to the hospital to restore its Enetron supply, the CB-01 Ace manages to destroy Needlezord. With Hiromu and Yoko now having a full understanding of each other, they and Ryuji intend to fulfill the promise they all made years ago 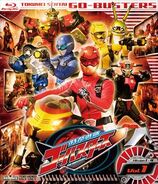 Go-Busters Volume 1, Blu-ray cover
Add a photo to this gallery

Retrieved from "https://powerrangers.fandom.com/wiki/Mission_3:_GT-02_Animal,_Deployed!?oldid=912356"
Community content is available under CC-BY-SA unless otherwise noted.