The Go-Busters investigate reports of the appearance of a Messiah Card not in the possession of either Enter or Escape, and Ryuji helps a young boy named Kenta who says he has seen the card.

While reviewing a blog posting of a Messiah Card sighting, the Go-Busters get a lead as their investigation takes them to a karate dojo in the Renbu district where they find unconscious martial artists and the boy who reported the card. The boy, named Kenta Sawai, attempts to flee when Yoko stops him and he denies knowing anything. By then, Enter arrives and calls in Buglers to fight them while referring to Kenta as his majesty. With Red Buster holding Enter at bay, Blue Buster finds Kenta defeating the Buglers before he runs away. Ryuji finds the boy and watches over him, waiting for the GT-02 to arrive, and he wins Kenta over by confirming the boy's dream to become an engineer. However, Kenta wants to prove himself to his father first so he can pursue his dream. Ryuji is then contacted by Hiromu who tells him the Messiah Card has fused into the boy's karate gloves. When Ryuji attempts to get Kenta to take the gloves off, Messiah takes over the boy's body as he proceeds to have everyone fight him to gather data. The other Go-Busters hold off Escape Evolve while Ryuji takes a beating as tries to reach through to Kenta, who manages to regain control of his body from Messiah. This forces the Messiah Card to use a nearby Enetron tank to become Karateloid as Ryuji becomes Blue Buster Powered Custom to fight him just as his Weakpoint takes effect. In the other fight, Enter spirits Escape away just as the Karatezord arrives. Go-Buster Ace and Buster Hercules battle the Megazord, ultimately destroying it, while Yellow Buster arrives to Ryuji's side and finishes the weakened Karateloid off. Later, Kenta earns his father's blessing to pursue his dream by showing him his new resolve. 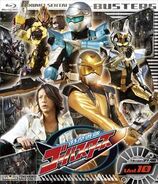 Go-Busters Volume 10, Blu-ray cover
Add a photo to this gallery

Retrieved from "https://powerrangers.fandom.com/wiki/Mission_39:_Finishing_Blow!_Messiah%27s_Fist?oldid=904200"
Community content is available under CC-BY-SA unless otherwise noted.